A rally and march for refugee rights took place in Sydney on June 26.

Thirty one Rohingya refugees in a detention centre in Darwin ended their 12-day hunger strike on June 25. They were protesting against the Australian government’s delay in processing their asylum claims, an average of nine months after their boats’ interception.

The president of the Burmese Rohingya Community in Australia, Kyaw Maung Shamsul Islam, told Mizzima the hunger strikers ended their protest after meeting with their lawyer who reassured them he would push for their release. He said that three of the protesters had been taken to hospital because of the effects of the fast.

He said 42 refugees began the strike, but 11 dropped out earlier because of the physical toll.

The 42 refugees were transferred to Darwin from 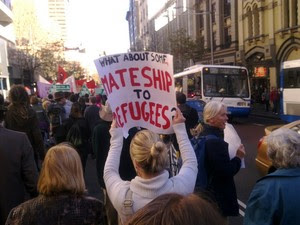 Australia’s offshore detention centre on Christmas Island in the Indian Ocean in April. He said the Rohingya protesters were very worried about the safety of the loved ones they had left behind.

“They have spent too much time in the detention centre”, said Brisbane social worker Soe Lwin. “It has been a long time since immigration officers and social service groups have visited the detention centre. So, they’ve lost their rights and have gone on a hunger strike.

ABC news said Australian immigration officials in Darwin responded to inquiries about the hunger strike by saying that such actions would not speed up the processing of their asylum applications.

The June 23 NT News reported one of the hunger strikers had attempted to hang himself on June 22 but a fellow refugee intervened to save his life.

Refugee Action Coalition spokesperson Ian Rintoul told Mizzima that he had recently spoken on the phone with an Afghan refugee who was detained in the same area as the group of Rohingya hunger strikers. The Afghan said many of the Rohingya were “very weak” because of the far north Australian heat and their refusal to drink liquids.

Rintoul said the Australian government’s security check process was what was causing the lengthy delays in the Rohingya’s asylum claims. He criticised the government for stalling the process despite the fact that Australia considers the Rohingya a resettlement priority.

He told Mizzima that there was “no justifiable reason” for continuing to detain the refugees, adding that the government has refused to disclose what the security screening process entails.

Kyaw Maung told Mizzima that one reason for the delay in security background checks is that Australian authorities are seeking documentation from all of the countries that the refugees lived in or travelled through after fleeing Burma — which for most Rohingya in Australia means Bangladesh, Thailand, Malaysia and Indonesia.

The slow and often corrupt bureaucracies in these countries, and their lack of administrative infrastructure, means just getting a response can take years. Kyaw Maung urged the Australian government to release the Rohingya while immigration officials continue their record checks.

The Rohingya are a Muslim ethnic minority group that hail from Burma’s western Arakan state and who speak a separate language from Arakanese or Burmese. Despite the fact that their families have lived in Burma for several generations, most Rohingya do not have Burmese citizenship. Many Arakanese nationalist organisations dispute the legitimacy of the Rohingya people, claiming they are merely Bengalis, a claim Rohingya activists say is a deliberate misrepresentation of history.

Rohingya activists point out that during the time of U Nu’s democratic post-war government, Rohingya were elected to the national parliament and Burmese state radio even had regular Rohingya-language broadcasts.

Over the last 20 years tensions in Arakan state between Muslims and Buddhists have been exacerbated by scarce land resources. Outbreaks of intra-communal bloodshed that many Rohingya believe were instigated by the Burmese military regime have sent hundreds of thousands fleeing into neighbouring Bangladesh, where several hundred thousand Rohingya refugees live illegally.

The plight of the Rohingya briefly made headlines across the world last year when dozens of boats containing Rohingya refugees were pushed back into the ocean by Thai authorities.

In an attempt to counter the sympathetic coverage the Rohingya boat people received, Burma’s top diplomatic representative in Hong Kong, Consul-General Ye Myint Aung sent a letter to his fellow diplomats in the territory that claimed that the Rohingya could not possibly be Burmese citizens because their “complexion is dark brown” and that they are as “ugly as ogres”.

Australia’s then-prime minister John Howard claimed the bartering of asylum seekers would limit the number of refugees trying to flee to Australia. “I think people who want to come to Australia will be deterred by anything that sends a message that getting to the Australian mainland illegally is not going to happen”, Howard told the April 18, 2007 Age.

However, the Howard government’s refugee-trading proposal was abandoned and no refugees were actually exchanged.

Kyaw Maung remains hopeful that all of the refugees will be released and given full residency status in Australia. He notes that the more than 400 Rohingya already in Australia have thrived.