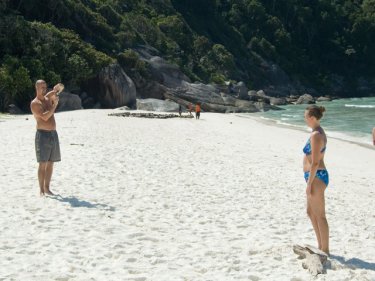 PHUKET: A boat containing 92 Rohingya was apprehended near the fishing port of Kuraburi, north of Phuket, about noon today.

The men and boys came ashore in Thailand and were handed over immediately to the Thai Army, raising concerns about whether the group will be treated appropriately under international conventions.

It's the first boatpeople vessel to be confirmed as arriving in Thailand under the new administration of Prime Minister Yingluck Shinawatra. The Government's policy on Rohingya has yet to be made clear.

Today's immediate transfer of the 92 from Border Patrol Police into the hands of the Army revived memories of the reprehensible ''push-backs'' of 2008-2009, when the Thai military and paramilitary detained Rohingya in secret on an island north of Kuraburi before setting large groups adrift at sea with little food and water.

Hundreds died before survivors reached Indonesia and India's Andaman and Nicobar islands, as revealed at the time in Phuketwan and the Hong Kong newspaper, the South China Morning Post.

Today the Rohingya came ashore near the village of Tung Laong on the mainland in Phang Nga province, about three hours' drive north of Phuket. Authorities were quickly notified.

It is believed the group was to be trucked north to the Thai-Burma border port of Ranong, where the Army has a large base.

It is from a village near the base that Rohingya were transported into secret detention on the island of Sai Daeng in 2008-2009.

Usually, illegal arrivals in Thailand are handed over to Immigration authorities. This was the procedure with groups that landed in several boats on Phuket and in provinces further south during the 2010-2011 ''sailing season,'' before the new government was elected.

Rohingya choose to chance their luck with people-traffickers between November and April when conditions in the monsoon-prone Andaman Sea are tranquil.

This coming ''sailing season'' is expected to see many boats put to the water because of Rohingya disillusionment over the new, supposedly more liberal approach in Burma.

While some reforms appear to be evident in the former pariah state, the repression of the outcast Muslims, who are deprived of citizenship, is not going to change.

The boatpeople had held off sailing in large numbers over the past two ''sailing seasons'' in the hope that they would be better treated, but the Burmese government has now revealed in the new Parliament that its policy towards the Rohingya remains as it was under the military junta.

The Navy applies a ''help on'' credo, offering food, fuel and medical treatment if necessary, and assisting the boats on towards Muslim Malaysia, which for many is the preferred destination.

While the whole South East Asian region and India was alarmed by the treatment of the Rohingya in 2009, Asean has fallen silent on the issue with the recent decision to allow the ''new'' Burma to chair the organisation in 2014.

Aid groups suspect that passengers on any Rohingya boats that land in Thailand before reaching Malaysia may be covertly handed back to the people smugglers.

The irony is that at this time of the year, the seas off Phuket and the Andaman coast are also being crisscrossed by holidaymakers enjoying diving, snorkelling and sightseeing outings in the same waters as boatloads of emaciated and desperate outcasts seek salvation.
Source: Phuket Wan News
Posted by Rohingya Arakanese Refugee Committee (RARC) at 2:50 AM