Update: Boatpeople Off Phuket Face Cat and Mouse with Navy in Pursuit 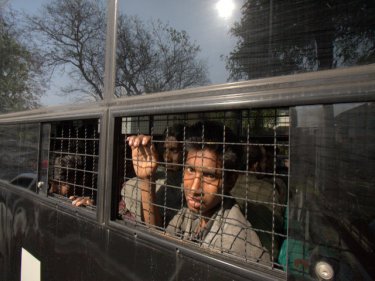 We don't know whether this young Rohingya, photographed in custody in Ranong in January 2009, is alive or dead Photo by phuketwan.com/file
By Chutima Sidasathian and Alan Morison

THREE boatloads of Rohingya have been intercepted by the Thai Navy in international waters in the past few days, given food and fuel and ''helped on'' to unknown destinations outside Thailand, Phuketwan was told by a usually reliable source on Monday evening.


Original Report
PHUKET: At least two boatloads of Rohingya are believed to be off the coast near Phuket today, with Thai Navy patrol vessels looking to ''help on'' the would-be refugees in a game of cat and mouse.

The ricketty Rohingya vessels, with more than 70 men and boys on board each, departed from Bangladesh on October 24 and October 25, sources say, probably aiming to reach Malaysia.

Contacts in Thailand have today confirmed the presence of one vessel close to the Andaman coast, not far off Phang Nga or Phuket, with the second vessel reported to be further out to sea.

A sighting yesterday put the second vessel off Koh Ka, near the better-known Surin Island, a popular destination for holidaymaking divers from Europe and Australia.

One boatload of would-be refugees landed on the vacation island of Phuket earlier this year, looking for food and water after a tortuous voyage south for sanctuary from the constant persecution experienced by the Muslim Rohingya.

Indications from Bangladesh and northern Burma are that many more boats are likely to put to sea this sailing season, between November and April, corresponding with Phuket's tourism high season.

The Royal Thai Navy, which patrols the Andaman coast from bases on Phuket and in Phang Nga, is currently stretched by the need to provide floods assistance and aid to Bangkok and surrounding regions.

Thailand's newly-elected government, led by Prime Minister Yingluck Shinawatra, is also stressed by the floods and has yet to enunciate its policy on the oppressed and stateless Rohingya.

If Thai Navy patrols intercept boatpeople at sea, they usually ''help on'' the vessel with fuel, food and medical aid. However, if the boats reach Thailand, the occupants are treated worse than all other illegal arrivals, often incarcerated for long periods, then simply vanishing.

Informed sources say that the number of boatpeople is likely to soar again this sailing season, possibly reaching levels not approached since 2007-2008 when almost 5000 men and boys were apprehended in Thailand in a single sailing season.

That large number of unwanted arrivals by sea led to the secret adoption in the next sailing season of the inhumane ''push-back'' policy. The Thai Army and paramilitary volunteers towed boatpeople out to sea on large vessels and cut them adrift with no power and little food.

Hundreds of men and boys died at sea, said survivors who reached India's Andaman and Nicobar islands and Indonesia.

A renewed wave of unwanted Rohingya arrivals would test Thailand's tolerance under a new government. While some refugees are treated in accordance with United Nations human rights requirements, the boatpeople do not have citizenship in Burma, and are consequently treated poorly by every nation in Asean, and no better by India.

Information about Rohingya is seldom conveyed through official sources and every effort is made to avoid the media or non-government aid organisations scrutinising their treatment.

At least two teenagers died in 2009 while in prolonged detention in the custody of Immigration officials in the Thailand-Burma border port of Ranong. Rumors persist of more deaths among the group that landed on Phuket in January and was was kept in primitive cells on Phuket and in Phang Nga.

Some of those apprehended were aged 16 or younger, but the boys were imprisoned with the men.

That group, along with other boatloads that landed south of Phuket last sailing season, was last seen being loaded into local boats at Ranong. Their destination was unknown.

Whether the signs of positive change in Burma since the national elections earlier this year also include a different approach to the Rohingya has yet to become clear.

However, even the use of the word ''Rohingya'' is avoided by officials these days in all Asean countries, an indication that a solution to the persecution of these stateless people is more remote than ever.

Downtrodden in Burma and Bangladesh or forced to seek a new, more liberated life in epic voyages, the Rohingya seem certain for the foreseeable future to remain probably the most persecuted ethnic group in the world.
Source: Phuket Wan
Posted by Rohingya Arakanese Refugee Committee (RARC) at 2:58 AM