By RARC,
Early in January of 2012, a military division( Sa-Ka-Kha-9) based near the ancient Falom village seized about 50 houses that had been built at the village's edge. It is one of 36 Rohingyan (a predominantly Muslim ethnic minority) villages in the Kyauktaw township in the western Burmese Arakan state along the Kaladan River. 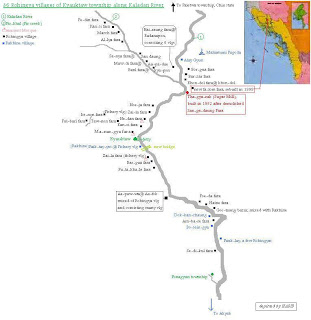 These lands had been re-bought from military by Falom villagers. For 17 years, until re-buying the land, their village had consisted of 280 houses, some farming lands and the mosque were demolished by military in 1995.
In recent years, the military sold-back some of these lands to the villagers. Villagers rebuilt about 50 houses, with more in construction.
During the mid-1995, the military forces led by sub-captain Mya Hlaing attacked villagers and drove them into the jungle. Dozens of villagers were detained and a few were brutally killed. The jungle was too deep and rough for the displaced villagers to live in.
Some of them went to other Rohingyan villages, some returned to stay around the graveyard of Falom village. The rest were settled near Namaungnya village.
In its latest attack, the military doesn't care that villagers have official papers for the land they bought back.
One Falom villager, Mr. Noor who has taken refuge in Australia, has approached Rohingya organisations to highlight his village's issue.
He said the military division responsible for the latest attack established itself near the village in about 1993 and forcefully occupied the village and lands in 1995.
Beside the division expanded its territory, it's using new techniques to exploit money from villagers.
Despite promises from Burma's military-backed civilian government to end repressive policies towards Rohingyan people — such as arbitrary fines, “Muslim free zones” and extensive jail sentences — nothing has yet changed.
The fact is that the ruling Union Solidarity and Development Party and the people of majority ethnic group within the Arakan state do not recognise the existence of the Rohingya people and they are still hostile towards them.
[For more information, Mr.Noor can be contacted at +(61) 4 6975 6116.]
Posted by Rohingya Arakanese Refugee Committee (RARC) at 2:21 AM