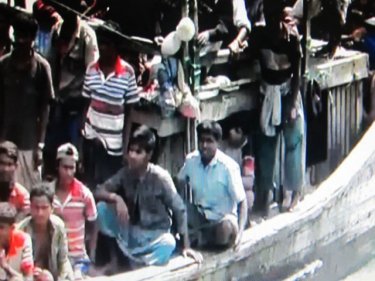 Rohingya on the boat that landed in Satun, south of Phuket
Photo by television footage still

By Chutima Sidasathian and Nussara Lem
PHUKET: A boat containing 85 Rohingya men and boys was apprehended yesterday off the Thai province of Satun, south of Phuket.

The would-be refugees, heading for Malaysia, were taken into custody by local police at La Ngu after being spotted by National Park rangers near Lidee Island.

It's believed their 12-metre vessel ran out of petrol and the sailors, all male, told villagers that they had been without food for four days.

According to officials who confirmed the capture of the men to Phuketwan, the would-be refugees were given food and drink by locals and will be handed over to Thai Immigration officials tomorrow.

The men said they had set off from Ranong, a port on the Thai-Burma border, with the blessing of local Thai officials and were aiming for Malaysia.

A television camera captured the boat arriving in Satun and the footage has been posted at: http://www.youtube.com/watch?feature=player_embedded&v=Bfh817YjB8I#!

Despite the signs of a more open and free approach by the Government in Burma, the Muslim-minority Rohingya remain non-citizens, without the rights accorded to other residents.

Restrictions on movement and marriage inside Burma mean many Rohingya men and boys put to sea in ricketty boats in an attempt to begin a new life elsewhere.

A crackdown by authorities in northern Burma and neighboring Bangladesh, where many Rohingya have fled to become unwelcome refugees, briefly interrupted the flow of boats south. More boats have been sailing recently.

One vessel, apprehended in Phang Nga, north of Phuket, on January 28 contained 79 men, including at least one Thai who appears to have been the person who provided the boat. in Bangladesh.

That arrival and another arrival of 54 men on December 4 at Takuapa, the Phang Nga district capital on the Andaman coast, were also filmed. Another boatload of 54 Rohingya is reported to have landed in the Indonesian province of Aceh on February 1.

Although the Thai military continues to be involved in the covert detention of the men who land in Thailand, non-government organisations are confident that they are no longer being mistreated.

The policy of Thai Navy patrols which intercept Rohingya vessels at sea is to ''help on'' boats to Muslim-majority Malaysia, their preferred destination, with food, water and repairs if required.

It's a change from January 2009, when Phuketwan and the Hong Kong-based South China Morning Post newspaper revealed that hundreds of Rohingya were being ''pushed back'' in a secret operation from an island in Thailand.

Scores are thought to have perished at sea before survivors reached Indonesia and the Andaman and Nicobar islands, which belong to India.

The change in approach by the Thai authorities means that some of the men have been directed to an island off southern Thailand, where people-traffickers have picked them up for transfer to Malaysia.

It is believed that those who are taken back to the Thai-Burma border by the Thai Army are also quickly returned to brokers.

The policy of the Burmese navy is the same as that of the Thai navy, although the ''help on'' policy in Burma sometimes comes with beatings, boatpeople report.

The boats usually come ashore in Thailand of necessity when the Rohingya run out of food and water or experience mechanical problems.

Often, navigating by sight, the men have no idea whether they are off Thailand or have reached Malaysia.

In recent years there have been many landings north and south of Phuket, including one on southern Phuket in January last year.

Of concern to NGOs lately have been three capsize incidents involving four boats. Many men were picked up by local fishermen off the Bangladesh coast but it's believed as many as 200 may have drowned.

The annual ''sailing season'' for Rohingya begins each November and does not end until the monsoon arrives, usually in April, when putting to sea in the kind of boats they pay brokers to use becomes even more dangerous.
Source: Phuket Wan
Posted by Rohingya Arakanese Refugee Committee (RARC) at 1:24 AM