COVER STORY:
ROHINGYAS: ENDLESS WAIT FOR REPATRIATION
About 400 desperate souls rescued from the seas and detained in a distress camp for almost three years at Port Blair dream for a free life and a reunion with their families. Abandoned by both Myanmar and Bangladesh, their fate hangs in balance, with an indecisive government policy and the sluggish pace of repatriation.
By Zubair Ahmed 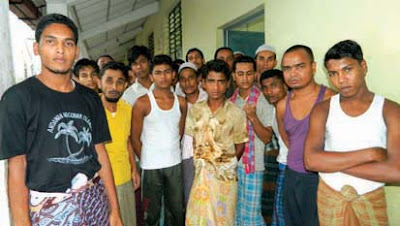 Since December 2008, about 702 boat people with Bangladesh-Myanmar nationality were rescued from various parts of the Islands. After a slow moving process, about 270 of them were repatriated.  The remaining 422 are languishing in the Distress Camp set up at Brookshabad by the ANI Admn. Another 54 were to be deported this week to Bangladesh.
"Its three years now, and we have not done anything wrong. We were first persecuted by the Burmese Junta, pushed by the Thais into the face of death. Indian government has been very sympathetic to us, but how can we continue to remain in a detention camp like this?" asks Ghulam Kadir, who is just 25 years old.
The 400 persons have been lodged in the Open Distress Camp, where they live in three dormitories.  The Admn spends about Rs 75 per diem. They all look well-fed and clothed. However, they are unable to accept their fate, of living as prisoners without any hope.
"It is very unfortunate that poachers and Illegal fishermen from Myanmar, Bangladesh or Thailand, who are apprehended gets repatriated after they serve their sentences, whereas these boatpeople does not have the right to even get out of their camp," says a senior police officer.
Mohammed Zameer, 23 years, born in Arakan has six members in his family. Faced with desperation and pain in managing a family in a hostile country, where its own citizens are persecuted by the Myanmar government, he crossed to Bothi Gaon in Bangladesh, just 20 kms away. One of the 2 lakh state-less and worst discriminated Rohingyas and Arakanese who had crossed the border looking for a safe haven from the clutches of Myanmar, he too dreamed of a better world. The border towns of Myanmar-Bangladesh are home to many such unfortunate souls. However life was not that easy in Bangladesh. He remained 8 months in Chittagong and thought of moving to Malaysia.
When he heard that Captain Rafeeque, would take him to Malaysia for an amount of 15-20 thousand takas, he too joined the 102 member group. Rafeeque, known as Captain promised them a safe landing in Malaysia. It took about 8 days to reach Phuket on their way, where they were intercepted by Thai Navy. They could see around 120 such Arakanese/Bangladeshi economic migrants already detained by the Thai Navy.
Lately, the Thai authorities had picked Red Sand Island for 'processing' the Rohingyas before pushing them into the sea. They are subjected to inhuman torture and humiliation in the process. They are detained on the beach with gun-trotting guards abusing and torturing them. About 413 of these boat people were loaded into a dead engineless incapacitated wooden boat and towed deep into the sea for 24 hours and left to drift. Two bags of boiled rice and two jars of water were provided on each boat. There was no provision to cook the rice. They soaked it in water and chewed raw. But that too did not last more than two days. 412 persons tossed in a boat with no space to even move, they drifted in the sea for more than 15 days and they even lost the count of days after a certain period. Hunger and thirst drove them mad. Everyday, they were throwing dead bodies into the sea. When after a long period, the boat drifted towards Little Andaman Islands, where they were spotted and rescued by the A&N police and ANC, out of 413, only 107 survived.
They arrived at Port Blair famished and totally dehydrated. They were shifted to hospital. After they recovered from the trauma, they were jointly interrogated by police and defence personnel. Although there is no lack of facilities, what they rue is detention without any crime. When asked SBS Deol, DGP told LOA, "They are not criminals and there is no justification in holding them in a detention camp, and I think they should be given Refugee status by Government of India."
When asked about the delay in repatriation, Naushad, Dy SP Emigration told LOA, "We have already forwarded all the details of the boatpeople to BSF as well as to the concerned High Commission; however, its time consuming and the response is very slow from Dhaka as well as from BSF."
"We are doing our best in addressing their requirements. "There is cellphone facility provided to them and they speak to their family members and relatives," he said.
The Administration is spending about Rs 12 Lakhs per month for the detainees.
"The desperation among the detainees has increased a lot. They had gone on hunger strike four or five times demanding quick repatriation, which is not a good sign," said DGP. A few of them in fact had tried to escape from the camp. About ten of them are undergoing prison sentence.
"In 2005-07, many Rohingyas had trespassed Thailand to enter Malaysia. Although they were detained by Thai authorities for 10-15 days, as soon as their relatives in Malaysia intervened and paid an amount of 3000 Malaysian Ringgit, they were released. In Malaysia, the government accepted them and would provide them Refugee Card for labourers," said Mohd Zameer.
Mukhtar (35) belonged to a group of 61 persons, which landed in Twin Islands on 08 Jan 2009. Their boat had developed an engine snag, and drifting in open sea for about eight days.

In another incident, about 150 persons landed near Tillangchaung Island on 10 Jan 2009.  Ghulam Kadir (25) who is still in the camp says that they were about 110 and 41 more people were tossed into an incapacitated boat by Thai authorities and pushed into the sea. About 113 persons have been repatriated. Another 36 persons are still in the Distress Camp waiting repatriation to Bangladesh.
One more incapacitated boat carrying 133 Rohingyas reached Pillow Millow village in Great Nicobar on 15th January 2009. The boat caught the attention of the residents of the village that had just 5-6 families living there after tsunami devastated it in 2004. Rest of the 41 families of the village were still living in temporary shelters in Campbell Bay.
However, the villagers took out their boats and with great difficulties towed the drifting boat to the village in a very rough weather. The Rohingyas were famished and dehydrated as was the case with earlier arrivals in the Islands. There was not much in the village to offer over 130 hungry people, said Paul Jura, the tribal chief of the village from Campbell Bay. However, the villagers offered them banana and whatever else they could. The police in Campbell Bay was alerted though even that in itself was a monumental task.
The issue is very serious for those of Burmese origin. There were about 107 of them, out of which 38 of them were rescued in 2008 and only one of them was repatriated. Another group of 37 were found on Barren Island in December 2011. 34 more of Burmese origin was rescued near Goal Tikrey, Kalighat on 23 December 2011. 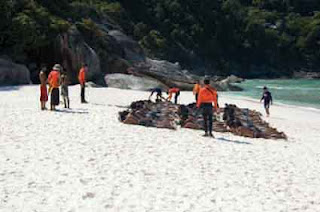 "Even Rohingyas living legally on Phuket have been refused passports by the ''new'' Burmese government. Those who do land in Thailand are ''helped on'' to Malaysia or into the arms of brokers," said Alan Morison, Editor, Phuketwan to LOA.
"Myanmar is not going to take them back as they are outcasts there and Bangladesh would do the same as they are Rohingyas. It would be inhumane to keep them in detention. Either United Nations or Government of India would have to pitch in and confer Refugee status to them," said a Police Officer.
It is human right issue of monumental proportion rather than stray incidents of desperate people drifting in with the trade winds as the A&N Administration treats it. A proper policy needs to be devised in consultation with the Government of India to handle the migrant Rohingyas problem.
Source: The Light of Andamans
Posted by Rohingya Arakanese Refugee Committee (RARC) at 1:15 AM