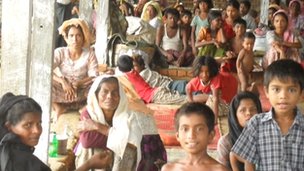 After the violence, some Rohingya took shelter in school compounds such as this one, in Maungdaw
Muslims in Burma's western Rakhine state have been subjected to attacks and arbitrary arrests in the weeks since communal violence erupted, Amnesty International says.

A state of emergency was declared in Rakhine in June after deadly clashes between Buddhists and Muslims.

Since then, hundreds of people have been detained in the areas where Muslim Rohingya people live, a spokesman said.

The government has dismissed the allegations as "groundless and biased".

Win Myaing, a government spokesman for Rakhine state, told the Associated Press news agency that the claims are "totally opposite of what is happening on the ground", adding that the region was calm.

But although communal violence has eased since the unrest in June, violations by the security forces appear to have increased, rights groups say.
'Rohingyas beaten'

Amnesty accuses Burmese security forces as well as ethnic Rakhine Buddhist residents of assaults, unlawful killings of Muslims and the destruction of property.

"Most cases have meant targeted attacks on the minority Rohingya population and they were bearing the brunt of most of that communal violence in June and they continue to bear the lion's share of the violations perpetrated by the state security forces," Amnesty researcher Benjamin Zawacki told the BBC's Viv Marsh.

Chris Lewa, director of The Arakan Project, which focuses on Rohingyas in the region, also told our correspondent that hundreds of Rohingya Muslims had been arrested, with allegations that some had been beaten and even tortured.

"Shortly after the main violence... then we start seeing a new phase of, I would say, state-sanctioned abuses, where especially in Maung Daw... we heard on a daily basis about mass arrests of Rohingya," Ms Lewa told the BBC.
Continue reading the main story

What sparked the violence in June?
The rape and murder of a young Buddhist woman in Rakhine in May set off a chain of deadly religious clashes.

Who are the Rohingyas?
The United Nations describes Rohingya as a persecuted religious and linguistic minority from western Burma. The Burmese government, on the other hand, says they are relatively recent migrants from the Indian sub-continent. Neighbouring Bangladesh already hosts several hundred thousand refugees from Burma and says it cannot take any more.

Reports from the group's network of sources in the area, mostly Rohingya, also said that authorities allowed Rakhine youth to assault Rohingyas in custody. The group also alleges that Burmese authorities took part in looting of shops and homes belonging to Rohingya.
The Burmese authorities denied similar allegations made by Amnesty International.
Some of the Rohingya Muslims arrested were held in connection with violence that erupted in Rakhine on 8 June, the day on which, observers say, violence was largely carried out by Rohingyas. The Arakan Project also says that some Rakhine, particularly those found with weapons, were arrested.
It is difficult to verify any of the information provided by such sources, as journalists cannot access the area.
Long-standing tension
Violence between Buddhists and Muslims flared after the rape and murder of a Buddhist woman in May, followed by an attack on a bus carrying Muslims.
Communal unrest continued in parts of Maung Daw as Muslims attacked Buddhist homes. Reprisal attacks then targeted Muslim homes and communities. The attacks left many dead and forced thousands of people on both sides to flee their homes.
There have been long-standing tensions between Rakhine people, who are Buddhist and make up the majority of the state's population, and Muslims, many of whom are Rohingya.
Many Rakhine Buddhists have said that much of the violence in June was carried out against them by Rohingya groups. Rohingyas say they have been forced to flee because of the violence.
Earlier this month, Burma's President Thein Sein said the "solution" for the Rohingya was deportation or refugee camps.