Western Burma in Conflict: Rights, Reconciliation, and the Rohingya 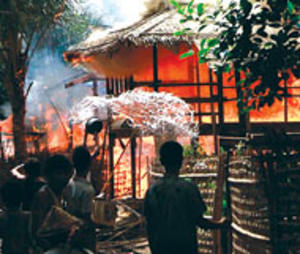 Two months of horrific escalations of violence have engulfed western Burma's Rakhine State. While the conflict lurches between reproach and revenge, the media seems to be at a crossroads between better reportage and being forgotten by the drive of the news cycle. The violence threatens to extinguish the tentative embers of hope that have been kindled by the last year's incomplete reform process.

How can Burma be supported to embrace a future of harmony? How can real reconciliation allow progress with the current climate of contempt, particularly against the Rohingya - who the United Nations and others have called some of the world's most persecuted peoples. It has entwined the Burmese military and former democracy activists into a sinister alliance. In the absence of credible observers (international aid workers have been removed and journalists have been forbidden access), we can still comfortably call for a cessation of violence on all sides. More importantly, we can look at the environment that this communal violence has erupted in so that we might solve this problem in the short and long-term.

The facts of the matter show that the anti-Rohingya campaign has been vastly heavier-handed in both the number of insults thrown and at the quality of hatred and violence called for. Even a cursory search of social media sites such as Facebook and Twitter, or of the comments sections of any number of online articles will show that the extremist racist and religious bigots use terms like "dog" or "terrorist" to attack the Rohingya. Among the hate sites online, there is even a Facebook group dedicated to "beheading kalars," with 'kalar' being a pejorative term to refer to the Rohingya. The inverse attacks, where there are calls for violence to be committed by the Rohingya against Rakhine Buddhists or against even the Burmese military or any form of violence called for at all? As of this writing I could find none. If such calls exist at all, then it is a much smaller proportion. Instead, the anti-Rohingya campaign wraps itself in calls for ethnic purity, defense of sovereignty, and protection of Buddhism. There are about 800,000 Rohingya in a Burma with nearly sixty million: hardly a threat to Burmese sovereignty any more than the Burmese (refugees and undocumented migrants) in Thailand are a threat to that nation's sovereignty. And even a cursory review of Buddhist (and Muslim) religious texts shows the calls to peace, so wrapping this violence in religion is an insult to faith itself.

There are disturbing (and increasingly credible) reports that the violence has been disproportionately abetted by state security forces. And there is an unquestionable campaign of hatred and vitriol that has been poured out by the very people who have been calling for freedom in Burma over the last decades. There have been calls to expel the entire Rohingya population or to engage in genocide or to institute an apartheid system against the Rohingya. There have been explicit calls for violence against the Rohingya. And there have been attempts to smear these benighted people with the moniker of "terrorist" and "dog" among others, terms that have an especially repellent resonance with Muslims. Where do these attacks come from? Not just the usual suspects in the military, but so-called freedom campaigners-turned-bigots like 88 Generation leader Ko Ko Gyi, the UK-based Burma Democratic Concern [sic], and mass-market film director Cho Tu Zaw (who is, ironically, seeking asylum in the United States but who feels comfortable engaging in ethnonationalism that might have made Slobodan Milosevic proud). Even the organization that I helped to found, the US Campaign for Burma, was slow to get behind the ball on this one (though they notably haven't joined the chorus of hatred, silence can imply assent and they seem to be doing better now).

The debate of when the Rohingya arrived in Burma is, in many ways, irrelevant to this crisis. There is solid scholarly evidence of their presence in Rakhine State for centuries. They were citizens of Burma until Ne Win, grim dictator from 1962 to 1988, deprived them of citizenship in 1982. They have maintained themselves under the bleakest of circumstances and still desire one thing: to be treated as equals and human beings. Though there has been some very good on reporting on this and there have been organizations that have had a strong voice for speaking about what is right on this issue (Human Rights Watch, Burma Campaign UK, Amnesty International, Christian Solidarity Worldwide, and DVB all come to mind), it has not been enough. We need to add more voices of individuals and more organizations to defend these human rights.

Reconciliation is imperative, but real reconciliation is possible only when those who care for Burma's future make a commitment to tolerance and human rights protection. Real reconciliation is possible only when truth is seen. The campaign to call death threats onto the Rohingya themselves and to those who would speak out on their behalf? It is unconscionable. That such behavior might be engaged in by the former military regime itself is unsurprising, but that it should be endorsed by previously laudable members of the democratic opposition or that it should find fertile ground in an ugly populist hatred should make us remember the disintegration of Yugoslavia, the mass violence that once convulsed Indonesia's encounter with democracy, or even Burma's past violence against not only the Rohingya but against citizens of Indian and Chinese descent. Burma's national sovereignty and brightly diverse cultural and religious heritage are not under threat by 1.3% of the population living in some of the most abject poverty, but that heritage may be stained in the violence that is getting dangerously frenzied with the idea of ethnic cleansing.

The future of Burma could be bright if reforms deepen and continue, but nothing will be so great of a blot on the potential of this nation as the attempt by some to baptize the meager newfound hope in the blood of a racist pogrom and attempt at excluding a people who are trying to merely live. Aren't we all? If Burma is to succeed and meet potential, it must learn, as America still is learning, that we all must get along. Can't we all just get along? We must support a reconciliation process, one that recognizes clearly the consequences of hate campaigns are violence. Such was the case in Bosnia, in Kosovo, and elsewhere. We must not allow these things to come to pass in Rakhine State.

If you care about the fate of over 800,000 people who are being reviled and hunted by the Burmese military in a strange alliance with former democracy activists, please register this concern. Take a moment and please make the following four contacts:
1. The Tom Lantos Human Rights Commission:
Tom Lantos Human Rights Commission
House Committee on Foreign Affairs
2170 Rayburn House Office Building
Washington, DC 20515
#202-225-3599
TLHRC@mail.house.gov
2. Your Congressional Representatives: If you're not sure who to contact, look up your senators and representatives at www.contactingthecongress.org and take a minute to call (better than email) or to carbon copy the letter you wrote to the Tom Lantos Human Rights Commission
3. Your media: Contact any or all papers, radio stations, blogs and television bureaus and ask them to cover this issue.
4. The Burmese Embassy:
2300 S St NW
Washington, DC 20008
#202-332-3344, 202-332-4350, 202-332-4352
info@mewashingtondc.com
Contact these organizations and ask them to: Report with integrity and honesty the full facts of what has been happening in Burma's Arakan State by respecting the human rights of all residents, including the Rohingya minority. Hold people and organizations accountable for their complicity and silence with regard to funding. Ask the media to report fully on this issue.