Plight Of The Rohingya: ASEAN Credibility Again At Stake – Analysis 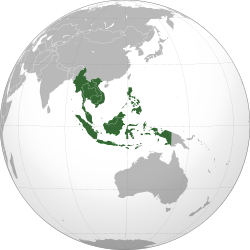 The suffering of the Rohingya in Myanmar’s Rakhine state is putting pressure on ASEAN to intervene. Coming just before their 21st Summit, the wisdom and stewardship of ASEAN leaders will be tested once again.

THE PLIGHT of the Rohingya Muslims of Myanmar – whom some label as victims of “ethnic persecution” – is threatening to blow up in the face of ASEAN, just weeks before the regional grouping convenes its 21th summit this month in Cambodia. To help defuse the humanitarian fallout from the Rohingya crisis, ASEAN has offered to work closely with the Myanmar government and the United Nations in the same way this tripartite arrangement effectively provided relief to the victims of Cyclone Nargis in 2008.

ASEAN
But Myanmar has rejected the offer on the ground that the conflict is an internal affair, according to Secretary-General Surin Pitsuwan. He cautioned that the atrocities, if not ended, could radicalise the Rohingya Muslims and destabilise Southeast Asia.

Dr Surin’s warning bell is timely. There are signs of growing agitation, especially within the Muslim communities of Southeast Asia, at the seeming lack of peace efforts on the part of the Myanmar government and the international community. There have been protests in Jakarta outside the Myanmar embassy and calls by NGOs in the region for ASEAN to address the violation of human rights of the stateless Rohingya. The Myanmar government does not recognise the Rohingya as citizens.

While Myanmar’s rejection of external assistance is not surprising, ASEAN should sustain its persuasive approach to contain and defuse the crisis so that it does not spill beyond the shores of Myanmar. The Rohingya issue will complicate efforts by ASEAN to preserve peace and stability in the region. “If the international community, including ASEAN, is not able to relieve the pressure and pain, (the Rohingya) could become radicalised and the entire region could be destabilised,” said Dr Pitsuwan.

In the face of the growing concern in the region ASEAN foreign ministers issued a four-point statement on 17 August 2012. They said they were following closely developments since the incidents on 28 May and 3 June and were ready to lend humanitarian assistance “upon the request of the Government of Myanmar”. A week earlier, Dr Surin disclosed he had proposed that ASEAN foreign ministers once again offer humanitarian assistance as had been done in the aftermath of Cyclone Nargis which left 138,000 people dead or missing. Individual ASEAN states were also offering assistance separately to the Rohingya.

Just before the ASEAN statement, Indonesian foreign minister Marty Natalegawa raised the issue at an emergency meeting of the Organisation of Islamic Cooperation (OIC) in Mecca on 14-15 August which declared the violence on the Rohingya as “crimes against humanity”. “The Myanmar government’s treatment of Rohingya Muslims is not in line with its recent efforts towards democracy. Any act of discrimination on the basis of religion or ethnicity is unacceptable,” Dr Marty was quoted by Antara as saying.

The OIC subsequently announced that it was given the greenlight by Myanmar to provide humanitarian assistance to the Rohingya. The Myanmar government, however, later reversed the decision following protests by Buddhist monks and laymen. Aung San Suu Kyi has taken a neutral stance despite pleas from the European Union.

The unexpected outbreak of the ethnic crisis in Rakhine state is an unwelcome strain on ASEAN which is still preoccupied with closing its ranks over internal divisions sparked by Cambodia’s controversial handling of the South China Sea disputes in July. How Myanmar addresses the Rohingya issue and the growing international concerns will impact on confidence in its chairmanship of ASEAN in 2014.

“Myanmar becoming the chair of ASEAN will be the focus of attention (on) how it is handling such an issue,” Dr Surin said. “ASEAN cannot be perceived to be standing by without taking any action on such a big scale of humanitarian difficulty,” he added. However, Thailand, Cambodia and Vietnam are likely to adopt a softer approach towards Myanmar on this issue as they are wary of international involvement in issues affecting their handling of their own Muslim minorities and are sympathetic to the concerns of their domestic Buddhist majorities.

Should Myanmar clash with other ASEAN members on the Rohingya issue, the current cracks within ASEAN caused by the South China Sea issue could worsen and complicate internal fault lines, which ASEAN can ill afford. Likewise Myanmar cannot ignore the growing concerns of the regional and international community over the plight of the Rohingya.

About the author: RSIS

RSIS Commentaries are intended to provide timely and, where appropriate, policy relevant background and analysis of contemporary developments. The views of the author/s are their own and do not represent the official position of the S.Rajaratnam School of International Studies (RSIS), NTU, which produces the Commentaries.