Iran to set up camp for displaced Rohingyas in Myanmar

An Iranian MP says the Islamic Republic plans to set up a camp in Myanmar to help the efforts to provide relief to the country’s Rohingya Muslims. 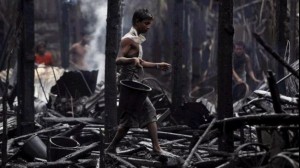 On Saturday, Majlis (parliament) National Security and Foreign Policy Committee Deputy Chairman Mansour Haqiqatpour said agreements have been reached with senior Myanmar officials to set up a camp in Rakhine state that can accommodate thousands of Rohingya refugees and where food can be provided for them.
He stated that Tehran will soon put forward its own plan for the cessation of violence against Rohingya Muslims and the restoration of the social rights of the Muslim community.


Earlier this month, an Iranian parliamentary delegation visited Myanmar to examine the situation of the Rohingya Muslims and find ways to help them.

Officials of the Iranian Foreign Ministry, the country’s Red Crescent Society (IRCS), and the Imam Khomeini Relief Committee accompanied the Iranian lawmakers during their visit to Myanmar.

Some 800,000 Rohingyas are deprived of citizenship rights due to the policy of discrimination that has denied them the right of citizenship and made them vulnerable to acts of violence and persecution, expulsion, and displacement.

The Myanmar government has so far refused to extricate the stateless Rohingyas in the western state of Rakhine from their citizenship limbo, despite international pressure to give them a legal status.


Rohingya Muslims have faced torture, neglect, and repression in Myanmar since it achieved independence in 1948.

Hundreds of Rohingyas are believed to have been killed and thousands displaced in recent attacks by extremists who call themselves Buddhists.

The extremists frequently attack Rohingyas and have set fire to their homes in several villages in Rakhine. Myanmar Army forces allegedly provided the fanatics containers of petrol for torching the houses of Muslim villagers, who are then forced to flee.

Myanmar’s government has been accused of failing to protect the Muslim minority.

Myanmar opposition leader Aung San Suu Kyi has also come under fire for her stance on the violence. The Nobel Peace laureate has refused to censure the Myanmarese military for its persecution of the Rohingyas.
Rohingyas are said to be Muslim descendants of Persian, Turkish, Bengali, and Pathan origin, who migrated to Myanmar as early as the 8th century.

By Press TV
Posted by Rohingya Arakanese Refugee Committee (RARC) at 2:30 AM