Phuket Boatpeople Vanish as Rohingya Lose Out to Lies and Propaganda 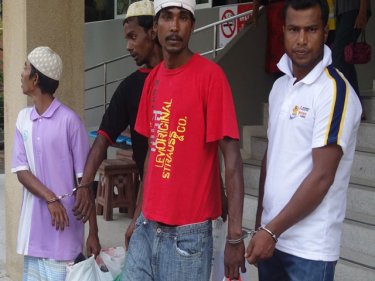 PHUKET: No sign has been found of 14 Rohingya said to have landed on Phuket in a small group of boatpeople 10 days ago, among many now turning up around the entire Indian Ocean region.

Eight of the Rohingya were apprehended quickly on February 22 and are believed to be being held in the Phuket Immigration centre in Phuket City.

Of the other 14 who were reported to have been travelling with them, there has been no sign.

Another riddle concerns the location of the boat in which they are said to have arrived off Phuket's popular Surin beach about 4am that day.

No reports have been made of the boat's sighting, or of its sinking. The eight boatpeople now being held walked south from Surin along Phuket's west coast road until they were apprehended in the township of Kamala.

A boat with just 22 on board would be unusually small among the frequent sailings of the oppressed Rohingya, who are mostly fleeing ethnic cleansing and brutal treatment in the Burmese state of Rakhine, also known as Arakan.

Most of the boats carry 60 or more passengers, with an increasing mix of women and children lately. People traffickers usually overcrowd the boats with passengers to maximise profit.

One boat packed with 205 men was detected off Phuket in late January and ''helped on'' towards Malaysia by the Royal Thai Navy.

As for the whereabouts of the 14 ''missing'' Phuket Rohingya, it's speculated that they may have encountered sympathetic locals and been hidden or assisted towards Malaysia, which is seen by many as a potential refuge.

Unlike the Buddhists and Rohingya of Rakhine or the Buddhists and Muslims of Thailand's deep south, Phuket has a long history of religious tolerance and neighborliness. The holiday island's large Muslim minority population is aware of the inhumane repression continuing inside Burma.

As the 1700 Rohingya now being held in detention centres and refuges across Thailand enter their second month in captivity, reports of discontent and squabbling are becoming increasingly frequent.

The six months that the Thai government has set aside for a proper assessment of the Rohingya's status probably seems an eternity to families with women and children separated from the menfolk.

The Rohingya would have anticipated a wait of a few days at most in the secret camps, created by people-smugglers in plantations along the Thai-Malaysia border, before making a crossing.

Conditions in the Thai government's holding facilities vary, with most alarm surrounding the Immigration centre in Phang Nga, north of Phuket, where 275 Rohingya men were reportedly being held in a severely confined space.

Raids on several border camps and the apprehension of boatloads of hundreds of new arrivals off the Phuket and Andaman Sea coast have left the large Rohingya group in Thailand as the focus of international attention.

The recent arrival of Rohingya survivors off Sri Lanka and Indonesia makes the point that persecution inside Burma has become a concern for the entire Indian Ocean region.

Reports are also coming of Finnish Nobel peace prize laureate Martti Ahtisaari heaping praise on Burma's leaders and even suggesting that Burma should be nominated for this year's Nobel peace prize.

We can only draw the conclusion that much of the mainstream international media finds acceptance of lies and propaganda easier than reporting on a humanitarian nightmare.
Source: here
Posted by Rohingya Arakanese Refugee Committee (RARC) at 2:06 AM