Official abuse threatens both the Rohingya Muslims and the country's opening to the West.
By
Matthew Smith
Rangoon
Burma has enjoyed a remarkable several years of economic and political opening, but it is now also suffering a far darker development—serious ethnic violence. Coordinated arson attacks and periodic massacres in the remote Rakhine State have flattened entire villages and left hundreds of Rohingya men, women and children dead since June 2012. More than 140,000 are relegated to miserable displacement camps and tens of thousands have fled by sea.
Western governments have spent the past two years trying to reconcile a brimming optimism about political reforms with harsh realities on the ground. Can the central government in Naypyidaw really be blamed for unrest in far-flung Rakhine State? The latest developments suggest the answer is yes and paint a dark picture of state-sponsored persecution. 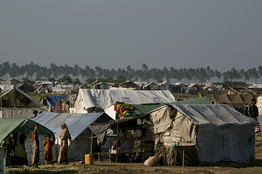 My organization, Fortify Rights, recently published leaked government documents revealing abusive "population control" measures against Rohingya Muslims. This and other evidence demonstrates that state and central government authorities are responsible for denying Rohingya fundamental human rights by limiting their freedom of movement, marriage and childbirth, among other aspects of daily life, in northern Rakhine State.
These findings support an already sizable body of evidence implicating Burmese government officials. A 2005 order from local Rakhine State authorities, for example, requires Rohingya "who have permission to marry" to "limit the number of children, in order to control the birth rate so that there is enough food and shelter." This order is imposed as a strict two-child limit that also prohibits Rohingya from having children out of wedlock. As a result, fearful Rohingya women have fled the country and undergone illegal abortions that have resulted in severe injury and even death.
The government's implementation is as bad as its policies. An undated confidential enforcement guideline on "Population-Control Record Keeping," which was circulated as recently as 2008, urges authorities to force Rohingya women to breastfeed infants in their presence "if there is suspicion of someone being substituted" in the family registries.
Rohingya couples in northern Rakhine State cannot live together unless they are married, nor can they marry without permission, which can be difficult to obtain.
For decades, as a matter of state policy, menacing security forces in northern Rakhine State have restricted freedom of movement between village tracts, townships and beyond. This limits the Rohingya ability to work, access health care and enjoy other basic rights. If Rohingya attempt to violate such policies, they risk years in prison, fines or both.
These abuses are supported and implemented by the highest levels of Burmese officialdom—by the same reformers that Western governments and investors are lauding as the hope for a better Burma. The minister of home affairs in July 2012 told parliament that authorities were tightening regulations against Rohingya "in order to handle travelling, birth, death, immigration, migration, marriage, construction of new religious buildings, repairing and land ownership and right to construct building[s]."
Other military and civilian officials are on record discussing restrictions against Rohingya as recently as last year. State-level policies (dating from 1993 to 2008) are signed by various officials and copied to departments that fall under state and central government jurisdictions. All of the policies remain in force today.
Meantime the government refuses to respond credibly to these revelations. Recently it expelled Doctors Without Borders (known by its French acronym, MSF) from Rakhine State. The Nobel Prize-winning organization provides life-saving health aid to tens of thousands of people in Rakhine, and the neediest recipients are Rohingya Muslims. The government claims that MSF wasn't transparent in its work. It also faults the organization for hiring "Bengalis"—a pejorative reference to Rohingya that implies that they are foreigners from Bangladesh.
The expulsion of MSF can only be interpreted as the latest act of state persecution against the embattled Rohingya. For some it will be a death sentence, and it has removed hundreds of humanitarian eyes from remote corners of Rakhine State—a truly frightening notion.
At the root of this tragedy is Rohingya statelessness. Of the more than 1.33 million Rohingya in Burma, all but 40,000 are stateless because of the country's 1982 Citizenship Law, which provides full citizenship only to certain groups that can demonstrate that they lived in Burma before the beginning of British colonial rule in 1823. All levels of government routinely refer to Rohingya as "illegal" intruders from Bangladesh, even though they have lived in Burma for hundreds of years.
If the international community and the government of Burma want to stabilize Rakhine State and prevent future outbursts of ethno-religious violence, they must end abusive state practices against Rohingya. The government of Burma should provide unfettered humanitarian access in Rakhine State, and foreign governments should press for an independent investigation into human rights abuses there.
These abuses pose an existential threat both to the Rohingya and to the delicate democratic transition now underway in Burma.
Mr. Smith is executive director of Fortify Rights and author of the organization's report "Policies of Persecution: Ending Abusive State Policies Against Rohingya Muslims in Myanmar." He is on Twitter @matthewfsmith.
Posted by Rohingya Arakanese Refugee Committee (RARC) at 1:14 AM