What message must John Kerry bring to Myanmar leaders? 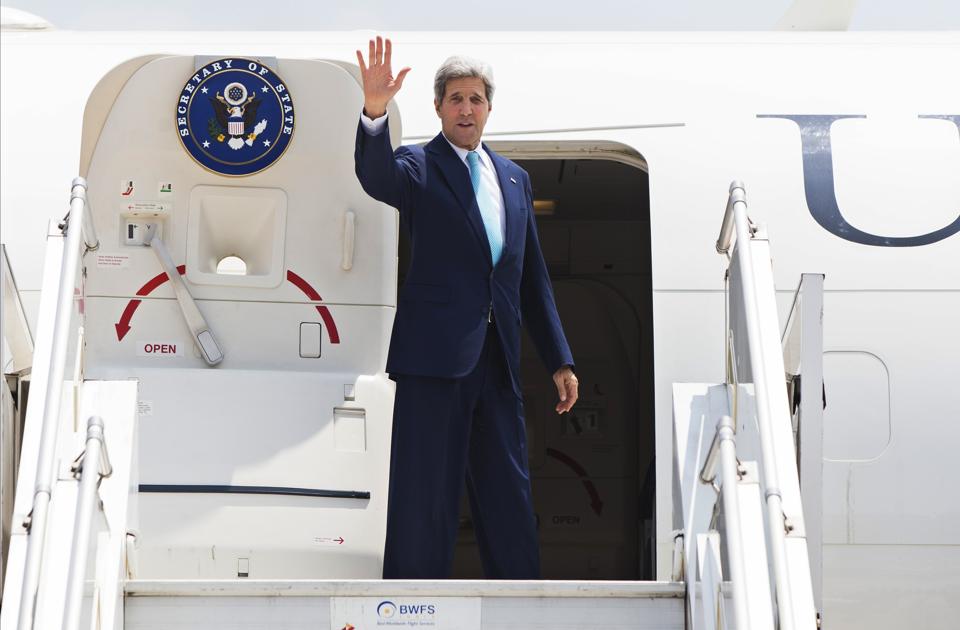 The US Secretary of State John Kerry is arriving in Myanmar's capital Nay Pyi Taw on August 9 for a three-day visit. The chief diplomat will meet government leaders and attend a series of meetings, including the Association of Southeast Asian Nations Regional Forum and East Asia Summit.

In a statement released on August 2, the US State Department spokeswoman Jen Psaki said that Kerry's trip to the region is one key aspect of US commitment in Asia to promote peace, stability, and prosperity.

The Obama administration has taken several initiatives to strengthen the US-Myanmar bilateral ties, including lifting of sanctions and the appointment of Ambassador Derek Mitchell, which was represented earlier at the level of chargé d'affaires.

In November-December 2011, then Secretary of State Hillary Clinton made a trip to Myanmar, which was the first by the top US diplomat in more than half a century. It was followed by a historic visit to the country by Barack Obama, the first-ever trip by a sitting US president.

Many hail the Obama administration's engagement policy. In his speech to graduates of the West Point military academy on May 28, 2014, Obama claimed reforms in Myanmar as a success for US foreign policy.

Obama then said, "We're now supporting reform and badly needed national reconciliation through assistance and investment, through coaxing and, at times, public criticism. And progress there could be reversed, but if Burma succeeds, we will have gained a new partner without having fired a shot."

However, Obama's interpretation of diplomatic success is not pleasantly received in the US Congress. Citing a growing list of human rights violations, the Chairman of the House Foreign Affairs Committee Ed Royce on July 9, 2014 called for a range of new punitive measures, including visa bans, an end to US-Myanmar military cooperation, and a consideration of re-imposing economic sanctions.

Ed Royce said, "It is time that we take off the rose-colored glasses and see the situation in Burma for what it is….We cannot continue to lavish more incentives on the government of Burma in hopes that it will do the right thing."

In light of recent developments, one logical question is: what message must John Kerry bring to the Myanmar leadership, especially given that President Obama will visit the country in November?

Besides promoting US national and security interests, there are at least four important issues the Secretary of State needs to discuss with the Myanmar leadership: addressing sectarian or religious tensions between Buddhists and Muslims, media freedom, solution to ethnic minorities' concerns, and the uncertainty surrounding the upcoming 2015 general election.

Firstly, the simmering tension between Rohingya Muslims, which the Myanmar government recognizes as Bengalis, and the Buddhists in Rakhine state has now spread to other parts of the country. The latest incident was a four-day violence in Mandalay last month, following allegations that a Buddhist woman was raped by her Muslim employers. The riot led to the death of two people - a Buddhist and a Muslim - and the injury of at least 14 people.

The latest deadly violence was largely a consequence of religious intolerance coupled with elements of religious extremism. Some Buddhist groups have been accusing the Muslim community of conspiring to dominate the whole country. Kerry must convey a message to the Myanmar leadership that equality of rights, including the right to freedom of religion, must be protected and safeguarded.

Secondly, evidences have shown a threat to media freedom. Between January 31 and February 1, five journalists from Unity Journal were arrested for "disclosing state secrets" in their investigative report on alleged chemical weapons factory in Magwe region. The journalists were charged with violating Myanmar's Official Secrets Act.

A court in the town of Pakokku handed down a 10-year-prison sentence to the journalists - Lu Maw Naing, Yarzar Oo, Paing Thet Kyaw, Sithu Soe and Tint San - on July 10, which the Amnesty International described it as a "dark day for freedom of expression."

There is a growing concern and anxiety among the media fraternity, which is a reminiscence of strict media censorship during the decades of military rule. Kerry should reiterate the essentiality of free and independent media for democratic transition and for the consolidation of democracy.

Thirdly, President Thein Sein's government has not only reached ceasefire agreement with almost all major ethnic armed groups, but has also been engaged in meetings in an attempt to address the decades-old ethnic minority demand, that is, autonomy under a federal system of government.

In its latest round of a four-day-summit of representatives of 16 ethnic armed groups which ended on July 29 in Laiza, the capital of the Kachin Independence Organization, the leader of the New Mon State Party Nai Hong Sar said talks with the central government have stalled because the government has refused to accept the ethnic groups' right to equality and self-administration.

Given ethnic minorities' issue as the fundamental reason behind decades of armed conflicts in the country, Kerry should urge the Thein Sein government for a permanent solution. The Obama administration should show its sincere commitment to peacefully resolve this issue, including a concrete offer to take part in the peace process, provided that there is a mutual interest.

Fourthly, preparation for the 2015 general election has unofficially begun with the National League for Democracy (NLD) demanding the amendment of Article 436 of the 2008 constitution, which gives a veto power to the Myanmar military on constitutional amendment.

The NLD and the 88 Generation Peace and Open Society launched a 54-day nationwide signature campaign calling for its amendment, which started on May 27 and ended on July 19. The NLD Chairperson Aung San Suu Kyi has also personally appealed to the international community.

The Obama administration has earlier expressed its support for constitutional amendment. Kerry needs to convey the US government's willingness to assist the Myanmar government to ensure that the upcoming election is free and fair and meets the international standard of electoral practices.

The US government should use its economic and political or even its military leverage for a smooth democratic transition and for the consolidation of democracy in Myanmar.
Source: here
Posted by Rohingya Arakanese Refugee Committee (RARC) at 1:57 AM