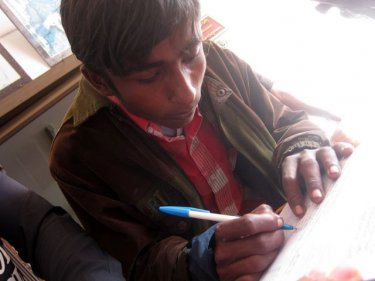 A Rohingya boy writes down his name after arriving on Phuket
Photo by phuketwan.com/file
PHUKET: Phuket can expect more surprise visitors anytime now. The ''sailing season'' for would-be refugee boatpeople from northern Burma and Bangladesh has begun with the arrival off the Malaysian island of Penang of the first vessel.

Between October and April, more vessels are expected to land along the Thai and Malaysian coasts, and the likelihood is that some will come ashore, more by chance than design, on Phuket.

More boats are expected to put to sea this sailing season than in the past couple of years, with people smugglers already reported to be selling berths in Cox's Bazar in Bangladesh, sources say.

The first arrivals this week landed on Penang after 10 days at sea, according to one newspaper report, with the desperate passengers spending the previous three to five days without food or water.

In the sailing season of 2007-2008, almost 5000 men and boys from Burma's Rohingya Muslim minority landed on Thailand's shores, prompting a change in policy to try to prevent such a large influx from occurring again.

Revelation of the push-back policy, in which Thai authorities apprehended Rohingya boatpeople then towed them out for release on the open sea in secrecy, shocked observers.

That inhumane treatment was brought to a swift end after Phuketwan journalists, working with the Hong Kong-based South China Morning Post newspaper, exposed what was happening.

The expose came in the early days of the Democrat Party's government, so the policy - ascribed to the previous ''red'' government but implemented with the military - was quickly abandoned. Or so we were led to believe.

Thailand and governments in South-East Asia and beyond appear to now be trying to hide from the world their treatment of the Rohingya and Rohingya boat people.

The word ''Rohingya'' even appears to be no longer favored in general usage. If the word Rohingya is not used, it becomes easier to deny mistreatment.

This week's 115 arrivals on Penang, who ''jumped into the sea clutching their meagre belongings along with pails, broken life preservers and whatever floating devices that were available,'' were described as being not Rohingya but ''hungry Myanmar nationals.''

Malaysia's 'The Star' quoted the police chief in the Penang town of Balik Pulau as saying: ''We gave them bread and mineral water but some were too weak to even break the seals of the water bottles.''

Officials in Thailand remain close-lipped about the fate of Rohingya who arrived on Phuket and at other places along the Andaman coast earlier this year. Boys as young as 12 were among the 68 would-be refugees who landed near Phuket's Rawai beach.

Repatriation is not possible because Burma's government does not accept the Rohingya as citizens. Authorities in Indonesia and India also reveal little about the fate of boatpeople who have landed in those countries.

Another boatload of Rohingya who landed in Thailand in January were described in official documents as ''Burmese from the South,'' which made their treatment uncomplicated by international human rights obligations.

Bangladesh, burdened with large numbers of Rohingya who have fled across the border from Burma, no longer permits journalists to visit refugee camps.

Well-informed contacts have revealed that some of the 68 boatpeople who landed on Phuket this year were eventually trucked to the border port of Ranong in August and last seen heading towards Burma in longtail boats.

They were probably transferred to other vessels, but we do not know their destination. Transparency is not part of policies covering the treatment of Rohingya in the Asean nations these days.

The recent posting on You Tube of an insightful documentary by Thai film maker Thananuch Sanguansak sheds fresh light on abuse of the Rohingya in Bangkok and Bangladesh especially, although the film's claim that the Royal Thai Navy mistreated the boatpeople is, as far as Phuketwan has been able to ascertain, not true.

There are touching moments in the film 'My Rohingya' at www.YouTube.com/user/Sthananuch as Rohingya explain their statelessness, their persecution, and their desperation to find a new life, freedom and contentment.

What continues to shock onlookers is the lack of compassion that the Rohingya are being shown by the governments of Burma and neighboring countries whose people now mostly have what the Rohingya are seeking.
Source: Phuketwan
Posted by Rohingya Arakanese Refugee Committee (RARC) at 11:26 PM