Diplomats and advocacy groups reaching out to the international community through the media.
State College, Pennsylvania, USA.
Ambassador Prof. Dr. Akbar Ahmed calls on U.S. Secretary of State Hillary Rodham Clinton “Madam Secretary, Please Don’t Forget the Rohingya”. The resounding calls are coming from dignitaries, diplomats, legislators, government officials, human right advocates, and many other dignified individuals in Washington, New York, and many other cities in the world, in various forms. Despite the inaccessibility of the Northern Arakan State by the international media or monitors, the bits and pieces of reports coming out of Northern Arakan is so alarming that the international community could not remain silent. Regardless of the mission and station of the international organizations, they have one unified voice on Rohingya – human right violations in historic proportions.

The United Nations (Special Rapporteur on Human Rights), the Irish Center for Human Rights, Human Rights Watch, Physicians for Human Rights, Amnesty International, Refugees International, U.S. Campaign for Burma, Medecin Sans Frontieres, The Arakan Project, Open Society Foundation, National Coalition Government of the Union of Burma (The Human Rights Documentation Unit), and many other organizations have expressed serious concerns over gross human right violations against Rohingya by the Burmese military and Nasaka forces (secret police named as Border Security Force). Some of them have openly demanded the Burmese military to end all the violations and restore the citizenship and all their rights. 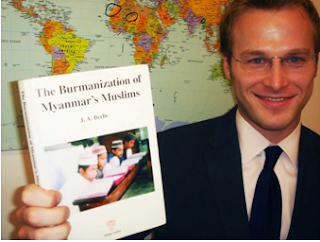 Harrison Akins, a researcher in the team of Ambassador Prof. Dr. Akbar Ahmed, at the American University at Washington, D.C., on a project on indigenous Rohingya ethnic minority in Burma. 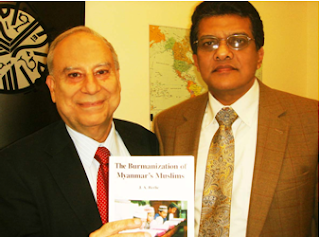 Ambassador Prof. Dr. Akbar Ahmed of the American University at Washington, D.C., and Prof. Dr. Wakar Uddin, the Director General of Arakan Rohingya Union
Most recently, Ambassador Prof. Dr. Akbar Ahmed of the American University has spoken out about the rapidly deteriorating conditions in Arakan and Rohingya refugee camps. His recent article “Little help for the persecuted Rohingya of Burma” in The Guardian newspaper in London was another reminder about the plights of Rohingya in Burma. Dr. Ahmed quotes BBC on Rohingya "one of the world's most persecuted minority groups" in his article and provided a historical perspective dating back the ethnic lineage of Rohingya in Arakan to many centuries.
Dr. Ahmed’s article  effectively addressed the root cause of the Rohingya ethnic cleansing dating back to 1962 during the reign of former dictator General Ne Win that began with his policy of "Burmanization", based on the ultra-nationalist ideology of racial "purity”. In discussion with Dr. Wakar Uddin about the human right violations against Rohingya by the Burmese military, such as its refusal to restore citizenship, travel restriction, ban on marriages, land confiscation, denial of education, denial of permission to renovate the places of worship, Dr. Ahmed simply replied “it is humanly unthinkable”. In parallel with several human rights analysts, Dr. Ahmed expressed his views of the Rohingya forced labor in Burma as modern-day slavery, forcing Rohingya to work on infrastructure projects which include constructing "model villages" to house the Burmese settlers that were brought in from mainland Burma intended to displace the Rohingya villagers. Dr. Ahmed also gently reminded the international community the dilemma of 35,000 registered Rohingya refugees and another estimated 250,000 unregistered in Bangladesh, while the gradual flow of refugees heading to Malaysia in rickety boats through the sea continues.
Dr. Ahmed is currently writing a volume dedicated to Rohingya human rights and political issues for the Brookings Institution in Washington, D.C.
Source: The Secretariat, Arakan Rohingya Union
Posted by Rohingya Arakanese Refugee Committee (RARC) at 10:08 PM