Friday, 06 January 2012 13:4
Chittagong, Bangladesh: Rohingya with other – Chin, Kachin, Shan, Kayah and Mon - ethnic groups’ representatives met British Foreign Secretary William Hague at the residence of the British ambassador in Rangoon yesterday at 5pm- 6pm, according to a source from Rangoon and BBC Burmese. 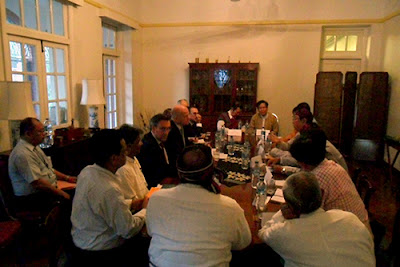 “Abu Taher highlighted the situation on Rohingya people of Arakan who are facing recently on – force labors, extortion, health, education, movement restriction, marriage restriction, religious persecution, unprecedented taxation, arbitrarily arrest and land confiscation- with recent report and appeal letter of NDPD to Burmese government which mention to find a solution about Rohingya issue of Arakan,” according to a Rohingya elite from Rangoon.

Abu Taher is Central Executive member, Head of Political Bureau and Research and development. He won from People’s Parliament, Buthidaung Township in 2010 election. But, Union Solidarity and Development Party (USDP) forcedly denounced his victor, according to NDPD press released and case file against Shwe Maung of USDP.

NDPD complained to Township Election Commission, the votes were recounted by the Commission where Abu Taher (NDPD) got 56,882 votes and Shwe Maung (USDP) got 53,702 votes, according to election watch in Buthidaung report.

Master Yunus is CEC of NDPHR – 4 seats winner of 1990 general election from Maungdaw and Buthidaung - mentioned about Rohingya citizenship rights – the historical facts - in Burma which still the Burmese government not clearly mention on it.

British Foreign Secretary William Hague arrived in Nay Pyi Taw yesterday on an official visit to Burma to observe the latest development of the country, according to official sources. “It is the first visit by a British foreign secretary to Myanmar since 1955.” 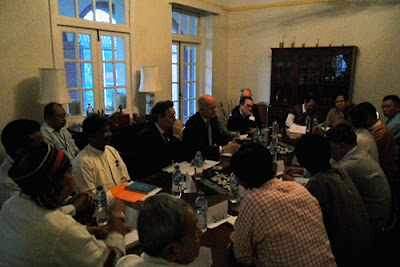 British Foreign Minister with Rohingya and other ethnic representatives
“The visiting Burma was my first destination for 2012, to meet the President, senior ministers and ethnic minority leaders,” according to British Foreign Secretary William Hague’s statement in his face book.

"I am visiting the country to encourage the Burmese government to continue on its path of reform, and to gauge what more Britain can do to support this process,” according to  British  Foreign & Commonwealth website.

"Further steps are needed that will have a lasting impact on human rights and political freedom in Burma. In particular, we hope to see the release of all remaining political prisoners, free and fair by-elections, and humanitarian access to people in conflict areas, and credible steps towards national reconciliation."

The Burmese Rohingya Organisation UK (BROUK) and Rohingya people would like to express our gratitude tothe British Foreign Secretary for his meeting with ethnic representative groups, including Rohingyas, during his visit to Burma. We are very delighted to see his encouragement to U Thein Sein regime to bring genuine change, long-lasting peace, freedom and protection of human rights for all the people of Burma, according to Maung Tun Khin, the president, the Burmese Rohingya Organisation UK (BROUK).

The ‘systematic racism’ against Rohingya has been institutionalized; and religious persecution against non-Buddhist people, especially Muslims and Christians, has increased. The credibility of U Thein Sein regime’s promise of reform is now seriously questioned. However, we are in high spirit to see that the Foreign Secretary has cautiously welcomed the promises of political reform in Burma saying ‘the military junta will be judged by its actions rather than its words’, the BROUK statement said
Source: Kaladan Press Network
Posted by Rohingya Arakanese Refugee Committee (RARC) at 11:31 PM