Saiful Huq Omi is a documentary photographer. He has working hard on the Rohingya Arakanese peopple. Some of his works are found: on Twitter: http://twitter.com/EmergencyFund, and Facebook: http://www.facebook.com/pages/Magnum-Foundation-Emergency-Fund/115201978543447
Posted by Rohingya Arakanese Refugee Committee (RARC) at 6:38 AM No comments:

Every year 20th February is marked as world day of social justice in all over the world, which was set forth by the United Nations General Assembly.

10 years later, it was reviewed by the World Summit for Social Development of Copenhagen Declaration and Program of Action (CDPA) and that was celebrated as first time in the year 2009.

In the year 1995, more than 100 world leaders took in a process in order to bring an end of poverty ad to ensure full working rights for all, while aiming to establish stability, security, social justice in the states.

But, the fate of the Rohigya Arakanese indigenous people of Burma’s Arakan State remain in sub-human condition and constant threats to suppression in one of the important members of the Association of South East Asian Nations (ASEAN).

Such suffering of the minority Rohingya Arakanese are well documented by the international community as these Rohingya Arakanese are in totally deprivation of social justice in all aspects, which is not only Burma but also in neighboring countries where they refuge as almost these states are not party to the UN Convention Relating to the status of refugees or its additional protocol.

Though, the Rohingya Arakanese are recognized as refugees by the office of the United Nations High Commissioner for Refugees (UNHCR), their social justice is totally undermined by certain types of legal frameworks.

It is therefore, appeal to the International Community and all concerned quarters, particularly the UNHCR to take necessary measure to ensure the social justice of the Rohingya Arakanese refugees by registering all undocumented refugees for whom the data was submitted by the Genuine Rohingya Arakanese Refugee Committee and that will assist to bring an end of the long-standing plight of these unfortunate people. 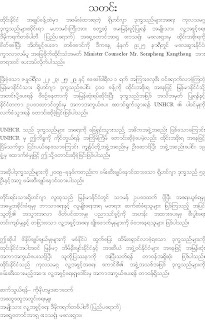