The Burmese military government has been planning to hold an election this year, and three political parties have recently emerged to represent Arakan and run in the 2010 election. They are the Rakhine National Progressive Party, the Mro and Khami National Solidarity Organization, and the Myanmar Rakhine State National Force Party. The Arakan League for Democracy, or ALD, which won the most votes in Arakan and 11 parliamentary seats, has officially announced that not only will they boycott the election but they will not even register as a party with the election commission. The ALD states as it reasons that the new constitution of Burma was unscrupulously adopted by force and fraud, and it will not bring any democratic or ethnic rights to the people of Burma. 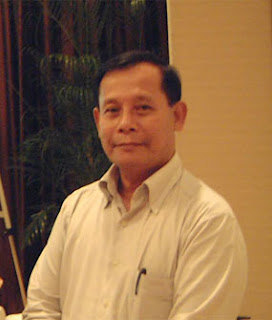 a's Ko Maung Aye to discuss the parties that will run in the upcoming election.

Dr. Khin Maung: Before speaking about whether we should compete in the 2010 election or not, I would like to talk about our stand on the matter.

First, we denounce the new constitution that was single-handedly drafted and undemocratically ratified by the Burmese junta to prolong their dictatorship.

Third, since the upcoming 2010 election is going to be held on the basis of that 2008 constitution it will not be a free and fair election, so we also oppose it.

Now the election regulations have finally come out, and when we analyzed them we found more immoral tricks. That has solidified our opposition to the election and we will continue opposing it.

However, I won't rule out the necessity of having other political organizations and sincere people to stand up and serve all Arakanese and to protect Arakan's rights. So I won't oppose anyone who is trying to form a political party to run in this election. Anyone can become involved in politics based on their belief and passion, and I have no feelings against them.

Narinjara: Do you think that having Arakanese parties run in the election can bring some benefits to the state and its people?

Dr. Khin Maung: It all depends on the extend of freedom and democracy inside parliament. Burmese generals might give some slack that they think can not hurt them. Depending on how well the representatives and senators can take advantage of this, how far they can fight for Arakan, and how willing they are to represent Arakan, the benefits could vary.

Narinjara: Do you know how much Arakanese people trust the competing parties and their candidates?

Dr. Khin Maung: Only the party or a person who really serves the people of Arakan deserves the peoples' trust. People will vote for the party they trust. In the 1990 election, as people trusted some leaders of the ALD, they voted for the ALD. In reality, some dishonest and conniving people became representatives. We need to be careful that does not happen again.

Narinjara: If the competing parties win some seats in the parliament, how well will they be able to work for Arakan and her people?

Dr. Khin Maung: It depends on how well freedom and democracy prevail in the parliament. Also, it depends on how much the representatives would like to serve the people who election them. If a party led by individuals determined to work for the people wins, to some extent, it could benefit Arakan.

Narinjara: If a certain political party that truly represents Arakan does not register and run in the election, what kind of impact could that have on the state?

Dr. Khin Maung: Well, it is necessary to be politically clever and contemplative. As I mentioned above, it depends on which party or who will faithfully and seriously represent Arakan. People have to differentiate who is for them and who is not. We must understand that this election is a "system change" for Burmans. In other words, it is a change from a military dictatorship to a democratic system. But for other non-Burman ethnic groups, including Arakanese, it is a fight for survival of their national identities. Burmese and ethnic people might see that difference. In terms of how much a party that does not register and contest in the election could affect Arakan, it will also depend on how well parties and representatives in parliament will be able to work for their national survival and development. At the very least, I hope they have the chance to protect their national survival.

Narinjara: Regarding this upcoming election, what would you suggest to the people of Arakan?