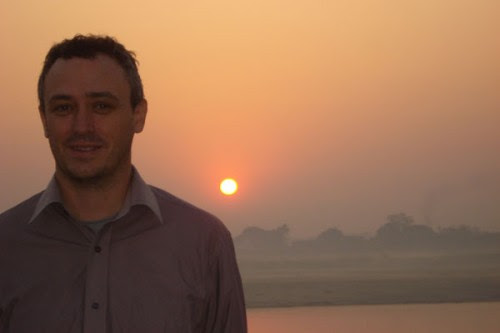 Mark Hallam beside the Irrawaddy river near Mandalay, Myanmar.
You could be forgiven for asking what is going on in Burma. Is the country really starting to change since a nominally civilian Government came to power in March
2011? Can refugees on the Thai Burma border safely return back to their country after decades of repression by a brutal military regime? During this time, approximately 3 million Burmese have fled to neighbouring countries. The displaced include an estimated 800,000 Rohingya (Muslims) in Western Burma and an estimated 500,000 in eastern Burma. Fighting along the border regions still continues, as do ‘black’ areas where tourists are not allowed to visit.
Certainly there are some positive signs of change in Burma, with more tourists and foreign media entering the country and Aung San Suu kyi being able to run for elections. However, even if she wins her seat at this election, the majority of the Government will still be military, so real change is not assured.
In late January, we visited Burma, after being invited by a very successful Burmese ex-refugee sponsored and settled by Sanctuary 14 years ago, living in Coffs Harbour, NSW. We were part of a group traveling together.
When we arrived at Yangon airport, straight away one could see corruption, as we, with our monk friends were able to walk easily through the diplomatic section without even having our baggage checked, while tourists stood in line watching as we quickly passed by.
We traveled by bus and stayed at monasteries in Yangon and Mandalay. Looking out of the bus window, there essentially seemed to be three groups of people within the country – monks, military personnel and the poor.

Many Burmese Children suffer in dire poverty, without the chance to go to School.
One could not help but feel that the military and some of the monasteries had a working relationship. We passed through squalid villages with open sewers and grass huts and then entered the Moby Monastery compound to see carefully manicured gardens, many elegant buildings housing monks quarters, including a library, computer rooms and a hospital….a stark contrast to the desperately poor villages outside. While there, we were interviewed by Burmese television, who asked us questions about our gifts to the monks. These gifts included cash and ipads, which were made to look like they came from us but were actually from (we assume) the man we were travelling with.
After staying in the monastery near Yangon, we headed north by mini bus over very rough roads, driving for many hours. Driving in Burma is a life threatening experience, with virtually no road rules, and we had several near death experiences! Government minders kept track of us in a lead vehicle.
The bus drove through the new capital Napyidor, and suddenly the landscape changed; modern four lane roads and expensive hotels appeared. Nobody knows why the capital was moved to this remote location other than for possible security reasons. It’s unbelievable to witness such investment in an area while the rest of the country is in such poverty and dilapidation.
The beauty of areas like Sagain and Bagan were astounding and the people are so friendly.
We returned to Yangon and then went on to Karen state. There we stayed in a town called Phan, where a ceasefire agreement had been signed not less than a week earlier. Later when we visited a monastery, we were asked by a monk how they could tell if a ceasefire was legitimate. As we continued to talk about this, suddenly a man entered the room and we were hushed by an older lady in the room. The Military General for the whole of Karen state sat down beside us, before asking how we liked Burma, to which we enthusiastically replied that it was a great place.
Following our visit to Burma we flew into Bangkok, where we met with city dwelling Asylum seekers from the Congo, Burundi and Iran. It was a shock to see small children having to be locked all day inside a room with their parents for fear of being arrested and put into detention if caught outside. Thanks to the Jesuit Refugee Service they are at least provided with a place to stay and food to eat. 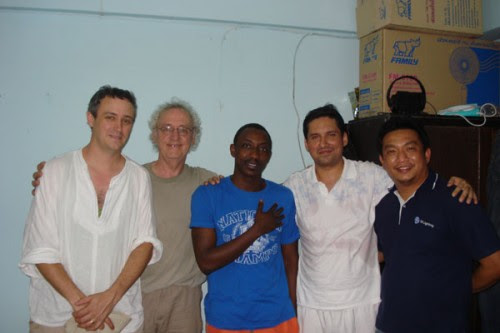 Mark Hallam (Secretary) and Peter Hallam (CEO) with Asylum seekers in Bangkok.
Unfortunately during the trip we became so ill that we were not able to continue to Mae Sot refugee camp as we had originally intended. All members of our group became ill at some point, and suffered from lack of toilet facilities and clean water.
Fighting continues inside Burma, and just today I am reading in the newspapers about the Burmese government blocking aid to tens of thousands of displaced civilians along the Chinese Burma border, including the displacement of 75,000 Kachin, 45,000 of whom have sought refugee in camps. Soldiers are still threatening and torturing civilians, raping women, and using children as soldiers.
Just by the mere fact that we were allowed into Burma, shows there are winds of change, but whether this will translate as real long term change for the people of Burma, or is just a trick to attract investment from the west, is another matter.
Burmese people are now full of hope for the future, but we can only hope it is justified. In the meantime Sanctuary will continue to try and assist the refugees who continue to suffer after many long years in the camps.
Source: Sanctuary Australia Foundation
Posted by Rohingya Arakanese Refugee Committee (RARC) at 3:39 AM