Thousands of Myanmar Rohingyas Struggle for Refugee Status in India 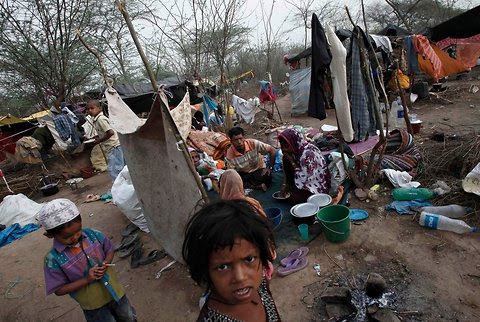 Adnan Abidi/ReutersA family that belongs to the ethnic Rohingya community from Myanmar gathered at a makeshift camp in New Delhi on May 14, 2012.

Since descending upon New Delhi more than a month ago, ethnic Rohingyas from Myanmar have been rounded up twice by police and ordered to leave, but the stateless group is determined to get the Indian government to recognize them as refugees.

“India is a great democracy, and that is why we want to stay here,” said Ziaur Rehman, who heads the group of Rohingya asylum seekers who have been camping in India’s capital since April 9 to lobby the government for refugee status.

Mr. Rehman spoke to India Ink on Wednesday from the Okhla neighborhood in south Delhi. Until Tuesday morning, he, along with an estimated 2,500 people originally from the Rakhine state in Myanmar, had been living in a makeshift camp near Vasant Kunj in southwest Delhi.


The deserted piece of land upon which they had pitched their tarpaulin tents in Vasant Kunj belonged to the government, but their presence raised the ire of the local residents in the wealthy South Delhi neighborhood and resulted in the asylum seekers’ eviction. The police packed them into trucks and dropped them off at several locations, including the Delhi railway station and the main interstate bus terminal in Kashmiri Gate in north Delhi, Mr. Rehman said.

This was the second time that the Rohingya had been forced to move since they arrived in the capital. Initially, they had squatted outside the office of the United Nations High Commissioner for Refugees in the upscale Vasant Vihar area for nearly a month. They were demanding “refugee status, help with access to health care, school admissions for their children, resettlement and financial assistance,” said Nayana Bose, associate external relations officer for the organization in New Delhi.

India is not a signatory to the United Nations convention relating to the status of refugees, which defines who qualifies as a refugee and refugees’ rights in their host country. Since there is no national law that deals with foreign refugees, the government will decide whether or not to grant the Rohingyas refugee status on a case-by-case basis.

Asylum seekers can be given the United Nations refugee cards, but only at the discretion of the UN agency. The Rohingyas said that the agency told them that the process of granting such cards could take time.

The Muslim minority group has suffered persecution for decades in predominantly Buddhist Myanmar. A large number of Rohingya have fled to neighboring countries, including Indonesia, Malaysia and Bangladesh, and several thousand have entered India through Bangladesh.

Some of these people who gathered in the Indian capital have been living in the states of Jammu and Kashmir, Uttar Pradesh, Hyderabad and Rajasthan, for several years. “They first approached the UNHCR in 2009,” Ms. Bose said, referring to the refugee agency, “but many have lived for longer periods of time in India.”

A spokesman from the Ministry of External Affairs, Syed Akbaruddin, said that unlike people from other nationalities, like the Afghans or Tibetans, who have been living in India, the Rohingya are stateless. “They are not accepted as citizens in Myanmar,” he said. 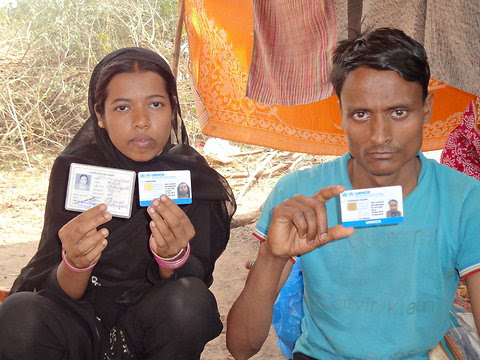 Pamposh Raina for The New York TimesYasmin Ara, 21, and her husband, Mohammad Zakaria, 22, pose with their UNHCR issued asylum seeker cards and the Myanmar government issued white colored “state guest” card, at a makeshift camp in New Delhi on May 11, 2012.

When India Ink visited the Rohingya camp last week near Vasant Kunj, several people flashed laminated white cards, which they said had been issued by the Myanmar government, that described the cardholders as “state guests” – meaning they were not entitled to any citizens’ rights in Myanmar.

Mr. Rehman said the Rohingyas had been imported as laborers from across the world during the British colonial rule in then-Burma, but they have never been recognized as citizens by the country.

Like many others in the camp, he landed in the northern Indian city of Jammu in 2011 after he crossed the border from Bangladesh, where several other Rohingyas worked as day laborers. After working as a medical assistant at a hospital in Jammu for three months, he moved on to Muzaffarnagar in Uttar Pradesh and taught at madrasas, or schools where instruction is based on the teachings of the Koran.

Other Rohingyas call the popular Mr. Rehman “doctor” even though he attended school only up to grade 10 in Myanmar. “They did not let us study any further,” he said, referring to the government.

The Rohingyas who approached the United Nations refugee agency have been issued asylum-seeker cards, which are valid for only four years from their date of issue. While that is the only proof of identification that they have in India, many of them say that it is useless.

Nazeer Hussain, 28, who worked as a laborer in Jammu, said, “Police in the state harassed me, asking me what my father’s name was, as this card does not have his name written on it.”

He said he was not paid for his work and that the United Nations asylum seeker card did not help resolve anything. “We will not leave till we get the refugee card,” he said.

The United Nations agency’s chief of mission, Montserrat Feixas Vihe, who met with representatives from the Rohingya community on Tuesday, said in a statement that the Indian government will be issuing long-term stay visas for asylum seekers from northern Rakhine state who are registered with the agency.

But G.V. Venugopala Sarma, the joint secretary in the Ministry of Home Affairs who deals with foreigners, said the Rohingyas need to go back to the Indian cities in which they were residing and register with the foreign regional registration office. The superintendent of police in their city, who serves as the foreign registration officer, will conduct a thorough verification based on the internal guidelines of the government of India, he said.

“Only after such a verification, a case-by-case assessment will be made whether the person has a well-founded fear of persecution or it is purely for economic reasons they want to seek the refugee status,” Mr. Sarma said. After that, a decision will be made on whether or not they will be granted a long-term visa, he added.

He defended the way the Indian government has dealt with refugees in the past, saying, “India has always had an impeccable record of taking care of refugees of all kinds in a humane manner.”

The Rohingya presence in New Delhi has not gone unnoticed by politicians. On Wednesday, the home minister, Palaniappan Chidambaram, was questioned in the Rajya Sabha, or upper house of the Parliament, by a fellow member, Balbir Punj, about the Rohingya camp in the capital.

“They demanded that they should be given refugee cards by the UNHCR,” said Mr. Chidambaram, “under the mistaken impression that the UNHCR will give a refugee card to anyone, who has come from any other country, and that the card will give them access to a number of benefits. Perhaps, they were misguided by some people. They have all been persuaded to go back to the places from which they came.”

Another member of Parliament, Sitaram Yechury of the Communist Party of India (Marxist), told the home minister: “If people from other religions have been allowed and Muslims have been denied, then it is very unfair.”

Mr. Chidambaram denied that there was any discrimination against the Rohingya asylum seekers on religious grounds.

As the politicians debate the plight of the Rohingyas’, the Rohingyas have defied the authorities as they continue to stay put in New Delhi, at least for now.

Asad Ghazi Ansari, the president of the nongovernmental organization Nawa-e-Haque, which has been helping the Rohingyas with food and medicine, said that most of the Rohingyas returned from where the police had left them.

On Wednesday, about 500 of them had assembled in Batla House, in the Okhla neighborhood in south Delhi, on what Mr. Ansari called “community land,” which meant that the land belonged to members of the Muslim community.

He said that his organization is making arrangements to get the other Rohingya together and set up another makeshift camp for them at Batla House.

“The issue was discussed in the Parliament today,” Mr. Ansari said. “As the movement is gaining momentum, we won’t let it die.”

Posted by Rohingya Arakanese Refugee Committee (RARC) at 1:06 AM