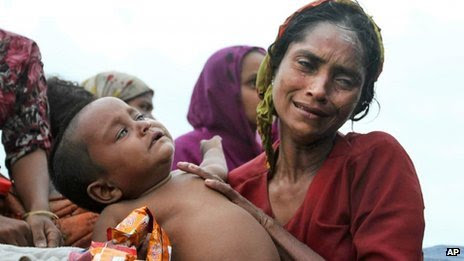 Women and children are adrift on boats on the River Naf
Continue reading the main story
The United Nations has urged Bangladesh to accept refugees fleeing violence between Buddhists and Muslims in Burma.

Tens of thousands of refugees have fled Burma's province of Rakhine by boat. About 30,000 are already in camps in Bangladesh.

As many as 1,500 are said to have been turned back in recent days.

The UN's refugee agency in Geneva, the UNHCR, says women and children have been left adrift on boats in the river Naf without food or care.

"There are now a number of boats drifting in the mouth of the Naf River with desperate people onboard in need of water, food and medical care," the UNHCR said in a statement.

"It is vital that these people are allowed access to a safe haven and shelter."

The violence flared after the murder of a Buddhist woman last month, followed by an attack on a bus carrying Muslims which killed 10 people.

Burmese officials have said the fighting has killed 29 people and thousands of homes have been burnt down.
Stateless group Most of the refugees travel to Bangladesh by boat through the river Naf which marks the border with Burma.

The majority of the mainly-Muslim Rohingya refugees already in Bangladesh are staying in two camps in Cox's Bazar district.

Rakhine state is named after the ethnic Rakhine Buddhist majority, but also has a sizeable Muslim population, including the Rohingyas.

The Rohingyas are a Muslim group and are stateless, as Burma considers them to be illegal immigrants from Bangladesh.

According to reports, rioting began on Friday last week in the town of Maung Daw, spreading to the state capital Sittwe and neighbouring villages.

On Thursday Burmese opposition leader Aung San Suu Kyi warned that the strife would continue without "the rule of law".

Speaking in Geneva on her first trip to Europe since 1988, she said the situation should be handled "with delicacy and sensitivity".

Posted by Rohingya Arakanese Refugee Committee (RARC) at 3:46 AM