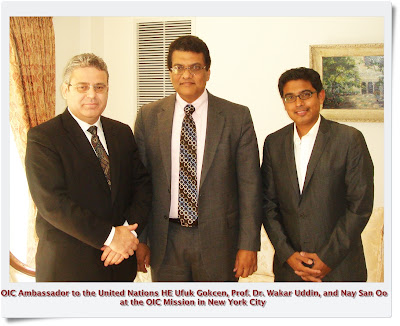 The OIC Ambassador HE Ufuk Gokcen expressed serious concern over the deteriorating situation in Arakan in a meeting with Prof. Dr. Wakar Uddin, the Director General of Arakan Rohingya Union (ARU) and the Chairman of the Burmese Rohingya Association of North America (BRANA), and Nay San Oo, the Information Secretary of BRANA and the Co-founder of Free Rohingya Campaign, at the OIC Mission at the United Nations.

In response to the questions by the HE Ambassador, Dr. Uddin provided detailed accounts of the current crisis in Arakan and the most immediate needs of the Rohingya victims in Northern Arakan State. Dr. Uddin and Nay San Oo explained how the brutal murders of Rohingya men, women, and children by Buddhist Rakhine vigilantes recently has transitioned to massive arrests, torture, and cold blooded murders of innocent Rohingya men by Burmese police, Lon Htein, and Nasaka forces in jails. They further explained how the State of Emergency imposed by Burmese government in Arakan is taking toll on Rohingya as they cannot go out of their houses in search of food and medicine even during day time as the Rakhine mobs are continuously attacking and looting Rohingya while Burmese police forces are providing coverage for Rakhine. “ The Rakhine are not obeying the state of emergency law, and they are roaming the streets and looting Rohingya houses. The imposition of state of emergency is providing leverage for Rakhine and crippling the Rohingya. These are compelling evidences of how the Burmese government has manipulated the situation in favor of Rakhine through this state of emergency law to further marginalize Rohingya” Dr. Uddin stated. “The Burmese forces are raiding Rohingya houses and taking the male adults away to unknown destinations. There are numerous cases of assault on Rohingya women and rapes by Burmese forces, particularly where men of the households were taken away by the Burmese forces” he added. Dr. Uddin has appealed to the HE Ambassador to assist the international community in rapid mobilization of the food aid to Rohingya as the Burmese forces are diverting the current aid supplies to Rakhine. He has also given the accounts of numerous mosques gutted and others shut down in Arakan by the Burmese government - not allowing Rohingya to pray and arresting Imams in several locations.

On the same day, in the afternoon, Dr. Uddin and Nay San Oo were invited to the United Nations for a closed-door briefing on the current situation in Arakan. The briefing was conducted through audio-visual presentation, beginning with demographic background information on Rohingya, some highlights of the roles of Rohingya in the multi-ethnic political process during the post-colonial periods of Burma, how the military dictatorship have systematically revoked the citizenship of Rohingya, the persistent human rights violations and persecution of Rohingya by the Burmese government forces, coordinated ethnic cleansing in Rohingya areas in Arakan, the ultra-nationalist and racist ideology of Rakhine as a compounding factor, implication of Burmanization schemes in ethnic minority areas in Burma, and the current ongoing violence and genocide against Rohingya in Arakan. Dr. Uddin stressed the serious needs of humanitarian aid such as food, shelter, and medicine as the current aid supplies are not reaching Rohingya people. Additionally, the Rakhine vigilantes are robbing food from Rohingya, if there is any remnant left in Rohingya’s possession. Further, Dr. Uddin made an urgent appeal the UN to intensify its efforts in Arakan and to demand Burmese Government to allow immediate deployment of UN personnel, particularly a commission of enquiry and peacekeeping/monitoring team, in Arakan State. In conclusion, Dr. Uddin stressed “we are running out of time, people are dying in the open and in jails of horror - please initiate the deployment of UN personnel in affected areas urgently”.