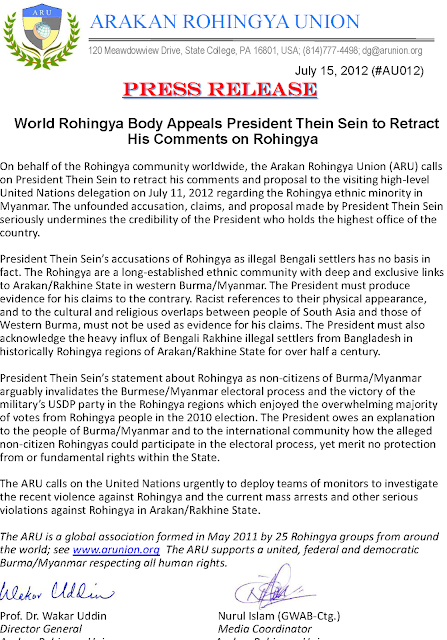 On behalf of the Rohingya community worldwide, the Arakan Rohingya Union (ARU) calls on President Thein Sein to retract his comments and proposal to the visiting high-level United Nations delegation on July 11, 2012 regarding the Rohingya ethnic minority in Myanmar. The unfounded accusation, claims, and proposal made by President Thein Sein seriously undermines the credibility of the President who holds the highest office of the country.

President Thein Sein’s accusations of Rohingya as illegal Bengali settlers has no basis in fact. The Rohingya are a long-established ethnic community with deep and exclusive links to Arakan/Rakhine State in western Burma/Myanmar. The President must produce evidence for his claims to the contrary. Racist references to their physical appearance, and to the cultural and religious overlaps between people of South Asia and those of Western Burma, must not be used as evidence for his claims. The President must also acknowledge the heavy influx of Bengali Rakhine illegal settlers from Bangladesh in historically Rohingya regions of Arakan/Rakhine State for over half a century.

President Thein Sein’s statement about Rohingya as non-citizens of Burma/Myanmar arguably invalidates the Burmese/Myanmar electoral process and the victory of the military’s USDP party in the Rohingya regions which enjoyed the overwhelming majority of votes from Rohingya people in the 2010 election. The President owes an explanation to the people of Burma/Myanmar and to the international community how the alleged non-citizen Rohingyas could participate in the electoral process, yet merit no protection from or fundamental rights within the State.

The ARU calls on the United Nations urgently to deploy teams of monitors to investigate the recent violence against Rohingya and the current mass arrests and other serious violations against Rohingya in Arakan/Rakhine State.

The ARU is a global association formed in May 2011 by 25 Rohingya groups from around the world; see www.arunion.org The ARU supports a united, federal and democratic Burma/Myanmar respecting all human rights.
Posted by Rohingya Arakanese Refugee Committee (RARC) at 1:14 AM