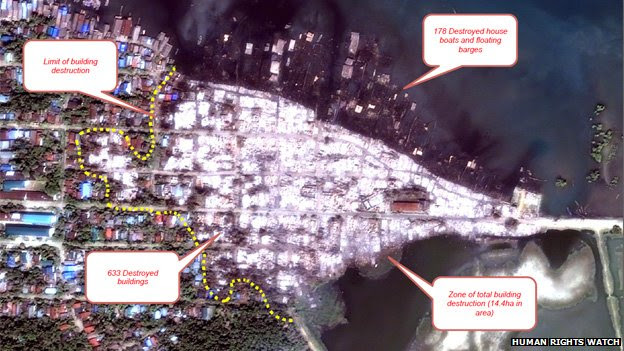 A human rights group has released satellite images of what appears to be the destruction of a coastal Burmese district riven by ethnic unrest.


Human Rights Watch says the images show that more than 800 buildings and houseboats were burned to the ground in Kyaukpyu, in western Rakhine state.
It says the victims were mostly Muslim Rohingyas, targeted by non-Muslims.
The president's spokesman acknowledged that whole villages had been burnt down and that more troops could be deployed.
Officials say 64 people have died in recent unrest, but HRW says it fears the figure could be much higher.
Phil Robertson, deputy Asia director at Human Rights Watch, said the violence showed that Burma's government "urgently needs to provide security for the Rohingya" in Rakhine state, which is also known as Arakan.
"Unless the authorities also start addressing the root causes of the violence, it is only likely to get worse," said Mr Robertson
'Bodies at sea'
The US-based group compared satellite images of the Kyaukpyu district taken on 9 and 25 October.
On 9 October, hundreds of closely packed houses can be clearly seen in rows along the peninsula - which sits at the mouth of an inlet - as well as scores of houseboats along the northern shoreline.
But in the image taken on Thursday, few boats remain and the 35-acre district is almost entirely empty of houses.
HRW said many of the inhabitants are thought to have fled by boat out to sea.

A local reporter who visited the site told the BBC's Burmese service the area had been completely destroyed, with some buildings still smouldering. The reporter said the district was also almost totally deserted.
Officials said there were no new reports of violence since Friday and that they have restored order in Rakhine.
Zaw Htay, a spokesman for Burmese President Thein Sein acknowledged "whole villages and towns being burnt down in Rakhine State while we could not provide full security in some areas".
"That's why the government is strengthening security. If necessary, we will send more police and military troops in order to get back stability," he said.
At least 64 people were killed this week, officials said, in the first serious outburst of violence since June, when a state of emergency was declared in Rakhine.
At that time deadly clashes claimed dozens of lives and thousands of people were forced to flee their homes - many are yet to return.
The UN earlier warned the country's reform programme could be put at risk by continued communal violence between local groups of vigilante Buddhists and Muslim Rohingyas in the western state.
HRW said it feared the death toll from the latest unrest could be much higher, based on witness reports and "the government's well-documented history of underestimating figures that might lead to criticism of the state".
Eid plans cancelled
Non-Muslims are reporting that this time they too were fired on by government forces during the unrest, and suffered many casualties.
Continue reading the main story

What sparked the violence in June?
The rape and murder of a young Buddhist woman in Rakhine in May set off a chain of deadly religious clashes.
Why was a state of emergency declared?
A state of emergency allows the introduction of martial law, which means the military can take over administrative control of the region.
Who are the Rohingyas?
The United Nations describes Rohingya as a persecuted religious and linguistic minority from western Burma. The Burmese government, on the other hand, says they are relatively recent migrants from the Indian sub-continent. Neighbouring Bangladesh already hosts several hundred thousand refugees from Burma and says it cannot take any more.
The government has declared a curfew in the affected areas, but its response since the violence first broke out in June is being widely criticised as inadequate, says the BBC's Jonathan Head in Bangkok.
On Friday six towns were hit by clashes and a night-time curfew is in place in several locations including Min Bya and Mrauk Oo where the latest spate of violence began.
It is unclear what prompted the latest clashes. The Rakhine Buddhists and Muslims, believed to be mainly Rohingya, blame each other for the violence.
In Bangladesh, border officials said they believed several boats with Rohingyas on board were waiting to try to cross the river from Burma. One official said 52 Rohingyas had been sent back in the last few days.
Muslims throughout Burma have abandoned plans to celebrate the festival of Eid al-Adha because of the violence.
There is long-standing tension between the ethnic Rakhine people, who make up the majority of the state's population, and Muslims, many of whom are Rohingya and are stateless.
The Burmese authorities regard the Rohingya as illegal immigrants and correspondents say there is widespread public hostility to them.
In August, Burma set up a commission to investigate the violence between Buddhists and Muslims in the west of the country. Authorities earlier rejected a UN-led inquiry.
Are you in the area? Or do you have friends and family there? How are you affected by the story? Please contact us using the form below.
Send your pictures and videos to yourpics@bbc.co.uk or text them to61124 (UK) or +44 7624 800 100 (International). If you have a large file you can upload here.