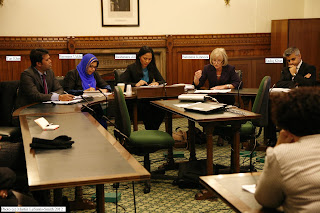 All MPs spoke about their continued efforts on Rohingyas crisis and will continue to pressure the British government to speak up for Rohingya people and other people who are facing human rights violations. MPs pointed  out they will  keep up the pressure in Parliament and elsewhere to make sure that Rohingya  issue is not forgotten and they all will campaign together to make sure people lives are protected. End of the press conference MPs made some future action plans and interviewed by some MPs.

Tun Khin, BROUK President, said, “We are grateful to British high profile MPs and Ministers who are concerned about ethnic cleansing on Rohingyas. It is very encouraging for all the Rohingya people that British MPs and ministers are so active on Rohingya issue. The Burmese Government must be held to account for how they are treating the Muslim people of Burma. Injustice is being done to the Rohingya people.”

1.      Put pressure on the Burmese government to stop all violence and intimidation against the Rohingya.
2.      Support sending UN Peacekeeping Force and international observers to Arakan State.
3.      Ensure unhindered delivery of humanitarian aids to the victims.
4.      Support the establishment of a UN Commission of Inquiry in order to establish the true facts and bring those responsible to justice.
5.      Put pressure on the government of Burma to repeal and replace the 1982 Burma Citizenship Law with a law in line with international law standards and human rights principles.