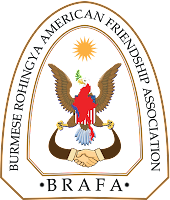 In commemoration of the 64th anniversary of the Universal Declaration of Human Rights (UDHR) as adopted and proclaimed by the UN General Assembly, the Burmese Rohingya American Friendship Association reaffirms its commitment to the human rights norms as declared in the UDHR, and pursues accountability of gross injustices and multiple repressions by the democracy branded Burmese Authoritarian Government led by President Thein Sein.

On December10, International Human Rights Day, the United States and international community celebrate the day and salute those around the world who struggle to defend, protect and promote the fundamental freedoms that are the birthright of all mankind. In Burma (Myanmar), human rights at all levels have been violated by the Burmese successive military governments for many years and still today, ethnic minorities particularly, the Rohingyas of Arakan State and ethnic Kachin are remained under Burmese government’s subjugation, segregation, social and political injustices, all forms of torture, inhuman atrocities, force relocation, property confiscation, prejudices and racial discrimination, extermination, sexual exploitation, wrongful imprisonment and extra judicial killings.

Based on recent experience, eye witnesses, and satellite news media information, the Burmese Government security forces involved directly together with the extremist Rakhine national political forces called Rakhine ruling RNDP led by Dr. Aye Maung and Arakan Liberation Party (ALP) in committing gross human rights violations against the Arakan Muslim population whose houses were burned down, properties were destroyed and looted, and many uncountable men, women and children were killed in the recent State sponsored ethnic cleansing and genocide in Arakan State in June and October months. These all are inhuman atrocities and rights violations against the Universal Declaration of Human Rights (UDHR).

On this 64th anniversary of international human rights day, we call upon the United States, the Veto power countries, and the international community to take action jointly and united way against the Burmese government through United Nations Security Council (UNSC) to save the people of Burma particularly, the Rohingya people and other helpless and voiceless ethnic minorities who cannot resist except suffering leading to extinction.