On 23 January 2013 around 10:30pm, at least 2 Rohingya houses were burnt down into aches at Ward No. 1 of Buthidaung Township, Arakan State, Burma, according to a local resident on condition of anonymity. 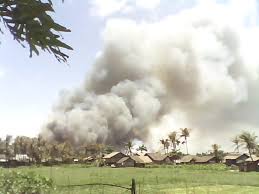 Fire broke out from electrical engine house which has been operating by the Rakhine national. There is controversy on the breaking of fire in both residents of Rakhine and ethnic Rohingya, while the Rohingya believe that Rakhine conspired to burn down the Rohingya houses from nearby areas, while the Rakhine claim that the fire was broke out from electric sort, he further told.

No any person was injured at the house burning incident, while at least Kyat 80 million worth of wealth were brunt down.

However, the local officials, particularly the members of NaSaKa (Border Security Forces) and other concerned authorities are investigating the real incident. Besides, the losers of these 2 houses are believed to be punished with both imprisonment and fine under the country’s penal code.

The owners of these 2 houses are feeling fear of unbearable pressures and punishment without fair investigation, while no Rohingya has chance to make enough income for their survival and family support for the reasons of severe restrictions, imposed against them.##
Posted by Rohingya Arakanese Refugee Committee (RARC) at 3:11 AM