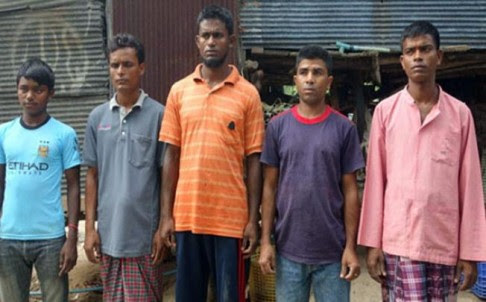 Rohingyan men who managed to swim to take refuge in a Muslim village in Phuket. Photo: Phuketwan

"We … are watching this closely and we are concerned," Tan said. While no specific timetable was offered from the Thai side, "we did say it was urgent".

We … are watching this closely and we are concerned. We did say it was urgent

Her comments follow reports in yesterday's South China Morning Post from its correspondents in Phuket detailing allegations from survivors of the February 22 incident near the island of Phuket on Thailand's Andaman coast.

The alleged killings came during an attempt by the military to transfer about 20 migrants from the boat that had carried them and more than 100 others from Myanmar to a smaller boat.

Some feared they would be separated from family members and jumped into the water, at which point the military opened fire, witnesses said. Survivors are being sheltered by local Thai villagers, some of whom heard the shooting and photographed Thai military vessels towing a Rohingya vessel. Thai naval officials have yet to comment.

Tan said the UNHCR was aware of earlier, vague media reports of shootings in Thailand from Rohingya boatpeople arriving in Sri Lanka and two recent boatloads in Aceh, on the north-western tip of the Indonesian island of Sumatra.

UNCHR staff had yet to be allowed access to the Sri Lanka migrants but had started interviewing the arrivals in Aceh.

"We are aware of the reports but we don't yet have our own information. We are trying to find out what happened," Tan said.

If correct, the reports suggest a lethal new twist in Thailand's previously controversial handling of the Rohingya, according to diplomats and observers.

Conservative Muslims from Myanmar's isolated Rakhine state, Rohingya have been described by the UNHCR as the most persecuted people on earth.

Denied citizenship in Myanmar - despite settlements going back centuries - Rohingya have fled across the land border with Bangladesh, where hundreds of thousands still languish in camps, and by boat to Thailand, Indonesia and Malaysia.

Lack of citizenship means it is difficult for Rohingya to marry or work legally.

Thousands have set sail to escape a recent outbreak of violence targeting their communities in Myanmar while hundreds languish in Thailand, which has yet to allow the UNHCR to screen them as refugees.

In 2009, a series of Post reports revealed a campaign by Thailand's Internal Security Operations Command (ISOC), an elite but secretive Thai army unit, to tow Rohingya in powerless boats out to sea and cast them adrift.

Hundreds died before the policy was disavowed by then-prime minister Abhisit Vejjajiva.

ISOC officials launched the crackdown apparently fearing the Rohingya could swell the number of terrorists in Thailand's restive Muslim deep south - even though they have never been linked to any violent groups.

Since then, the Thai military has publicly adopted a policy of "helping on" Rohingya boats intercepted at sea, supplying them with fuel, food and water on the promise that they keep sailing and do not land in Thailand.
This article first appeared in the South China Morning Post print edition on Mar 08, 2013 as Answers urged in 'killing of refugees'