Rioters have burnt Muslim-owned houses and shops in an outbreak of apparent sectarian violence in Burma (also known as Myanmar).

The trouble broke out overnight around the central town of Kanbalu, when police refused to hand over a Muslim man accused of raping a Buddhist woman.
It is the latest in a series of attacks on the Muslim community that police have failed to control.

The state government has sent reinforcements to the area.

The violence is a stark reminder of how much anti-Muslim sentiment there is in Myanmar and how little the authorities are doing to contain it, says the BBC's Jonathan Head in Bangkok.

Earlier this week, a car carrying UN human rights rapporteur Tomas Ojea Quintana was attacked by a crowd in the central town of Meiktila as he tried to investigate sectarian attacks there in March.

He has accused the country's government of failing to protect him when his convoy came under attack as some 200 people surrounded his car, punching the doors and windows. 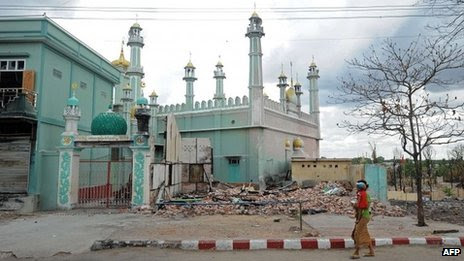 Thousands of Muslims were left homeless after the clashes in Meiktila

At least 43 people - most of them from Burma's small Muslim community - died in the violence that erupted after an argument at a Muslim-owned shop.

The violence sparked clashes in at least three other towns and left more than 12,000 Muslims displaced.

The clashes in Meiktila were the worst since ethnic violence in Rakhine state last year, where nearly 200 people were killed and tens of thousands forced from their homes.

The conflict that erupted in Rakhine involved Buddhists and Rohingya Muslims, who are not recognised as Burmese citizens.
The communities remain largely segregated in the wake of the violence, with many displaced Rohingya Muslims living in tents or temporary camps.
http://www.bbc.co.uk/news/world-asia-23831382
Posted by Rohingya Arakanese Refugee Committee (RARC) at 2:19 AM