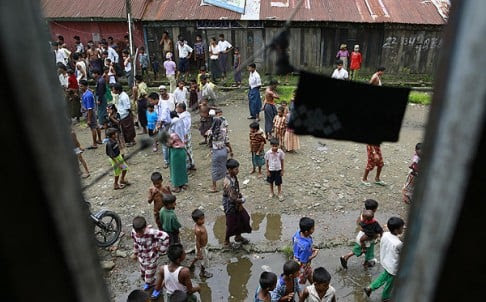 The influx of Rohingya refugees to Thailand has begun early this year, with a boatload landing yesterday in the country's south - the first of what's likely to be thousands of new arrivals from Myanmar.
The so-called safe sailing season usually does not start until October but yesterday's landing of 219 men at a beach in Satun province indicates the desperation of fleeing Rohingya.


Three other boats are reported to have set off from Myanmar's troubled Rakhine state at the same time but, with monsoon squalls lashing seas north and south of Phuket, there is no word of their whereabouts.

Police held the newly arrived refugees at Rawai beach before moving them to a shelter.

What will happen to them is not clear because Thailand's immigration centres and police cells are already packed with Rohingya apprehended over the past eight months.

At least 35,000 Rohingya men, women and children fled in the last sailing season. That number could triple between now and April, sources said, because conditions in Myanmar for the Rohingya and other Muslims have grown more precarious since violence erupted in June last year.

Thailand claims to be protecting the Rohingya but eight deaths have been reported in custody this year and scores of Rohingya have absconded into the arms of people smugglers.

A six-month deadline set by the Thai government to decide the status and future of the Rohingya being held in Thailand has been extended to one year. This suits hardliners who would rather keep the Rohingya in confinement indefinitely as a warning to others that they will find no sanctuary in Thailand.

Officials in the Thai military ignore evidence from Rohingya who make it to Malaysia and from villagers along Thailand's Andaman coast that renegade officers are involved in people-smuggling.