Andrew Stanbridge
Mamuda, right, sits with her two children next to the body of her husband, Nasir, who had been fatally shot by police after clashes in an internally displaced person camp in Myanmar. "I cannot stay here in the camp, I must go," said Mamuda, who hopes to flee to Malaysia. By Danny Gold, NBC News contributor
SITTWE, Myanmar -- Driven from their homes by mob violence, many members of one of the world's most persecuted minorities face a harrowing dilemma: to tolerate horrendous conditions in sites likened to "prison camps" or to risk their lives fleeing aboard rickety boats.

"I cannot stay here in the camp, I must go," said Mamuda, a Rohingya Muslim, as she sat in a threadbare bamboo shelter, cradling her young children and watching her husband Nasir’s body be prepared for burial.


"He came home with a bullet wound," said the 27-year-old, who plans to make the perilous more than 1,000-mile sea journey to Malaysia as soon as she can. "He kept saying, 'It's too much pain, it's too much pain,' until he collapsed.”
According to Mamuda, police shot Nasir after he and other Rohingyas tried to stop them from reaching the site of an earlier clash.
Mamuda and her family are among tens of thousands living in internally displaced person (IDP) camps in Myanmar in the wake of sectarian violence. Since June 2012, Rohingyas have found themselves targeted by Buddhists in attacks that have left hundreds dead and entire villages razed.

A Human Rights Watch report released in April alleged that the Rohingya had been the victims of "crimes against humanity and ethnic cleansing." 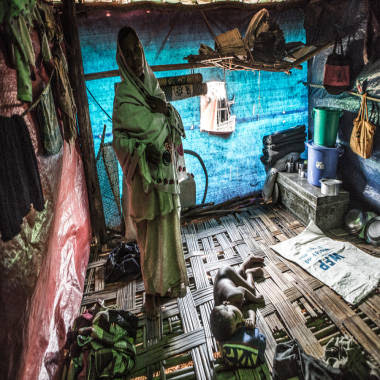 The United Nations High Commissioner for Refugees estimates there are currently 92,000 refugees in 24 IDP camps around Sittwe on the western coast of Myanmar, with the overwhelming majority being Rohingya. Sprawling out over rice paddies, fields, swamps, and beaches, the camps are a mix of tents and bamboo huts, some with aluminum siding, spread out for miles. Sturdier longhouses have recently been constructed, but these are often overcrowded.

The summer rainy season, coupled with lack of medical care, has left some of the camps flooded and wracked by disease.

Andrew Stanbridge
A Rohingya child naps in the searing midday sun inside his familiy's 10-foot by 10-foot room inside a shelter provided by aid groups.

Many Rohingya have now been living in these camps for more than a year, with little to no access to health care, education or employment and their movement restricted by armed guards. There is little hope that things will change.

Desperation is forcing more and more residents to consider dangerous boat journeys to Thailand or Malaysia.

"The living here is very dangerous and there's no future," said Aung Win, a Rohingya community leader who lives nearby and frequently visits the camps, where Dengue fever, tuberculosis and diarrhea are rife. "The people are sick of the conditions."

Conservative estimates put the total number of Rohingya who have turned to the high seas to leave Myanmar in the past year at 35,000. According to Refugees International, 785 Rohingya have drowned since October 2012, compared to 140 during all of 2011.

Matthew Smith, author of the Human Rights Watch report on the minority group's plight and executive director of Fortify Rights International, said that he expects an unprecedented number of Rohingya to give up on life in the camps.

"We're likely to see tens of thousands of more asylum seekers take to the sea in coming months," Smith said.

Many say they will flee as soon as the rainy season ends in October and the sea grows calmer.

The Rohingyas are a Muslim minority concentrated mostly in the western Myanmar state of Rakhine and in Bangladesh along the region that borders it. The United Nations has referred to the group as being among the world's most persecuted minorities. In 1982, Myanmar's military junta passed a citizenship law which excluded them from a list of 135 designated ethnic groups, a move which effectively left about 800,000 Rohingya stateless.

The contemporary conflict is traced back to the Second World War, where the Muslim Rohingya remained loyal to the British colonialists and the Buddhist Rakhine allied with the Japanese.

Since then “governments in the predominantly Buddhist country have routinely persecuted and forcibly displaced the Rohingya population,” according to the Human Rights Watch report, which pointed to vicious military efforts to drive the Rohingya out of the country in 1978 and 1991.

Ethnic and religious tensions were suppressed during nearly a half century of military rule that ended in 2011. However, the rape and murder of a Rakhine Buddhist women sparked sectarian violence the following June in western Myanmar. Another wave of violence in October resulted in the deaths of nearly 200 people and forced 140,000 people, mostly Rohingya, from their homes. Rohingya mobs have also attacked Rakhine villages.

A prominent monk has been dubbed the "Buddhist bin Laden" and the "face of Buddhist terror" after launching a campaign against Muslims in Myanmar.

In an unofficial camp called Then Taw Le, one resident responded harshly when asked if conditions had improved since he arrived last June.

"How can these conditions be better than our villages?" he said. When questioned whether he would like to return his village, the man said, "How can we go back? Our houses were burned down, there is no safety."
Phil Robertson, deputy director of the Asia division of Human Rights Watch, described the IDP sites as "prison camps surrounded by military personnel preventing them from moving back and forth." 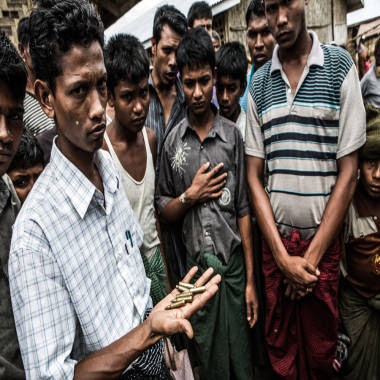 Andrew Stanbridge
A Rohingya man holds bullets and casings left behind after police shot at a mob of camp residents who were demanding the dead body of one of their villagers.

He said the Rohingya were facing a situation "as bad as you can imagine."

"Imagine the rainy season in low-lying areas with no health services, no schools, and patrolled by hostile military personnel who will shoot you if you try to escape," Robinson said. "U.N. workers have said off the record, privately, that they have been in refugee camps around the world and they have not seen camps this bad anywhere. It's an entirely grim situation."

A Rakhine Buddhist IDP camp located closer to Sittwe presents a stark difference to the Rohingya camps, though they are not without issues. Single-family homes of solid construction are spaced out on land much closer to town, and school and medical services are clearly provided. Rakhine are also allowed to come and go freely.

In his newly built home, 41-year-old construction worker Kyawk Thein Shwe recalled how Rohingyas had burned down his house, forcing him to flee. He blamed them for initiating the violence. “They are very tricky," he added. "I would like to stay with them peacefully, but it’s not possible in this world. If we keep on living with them, the problem will come again.”

Fear of further attacks, however, has not deterred many Rohingyas from wanting to return home.
"If the government allowed us to go back to our old village, we'd go," said Mahmoud Hussein, a Rohingya boat driver who has lived in That Kay Bin camp since August 2012. He complained of the lack of employment and schooling for his children, and said that many of his neighbors had fallen ill.

"There's no business, there's no learning. If it continues like this in the future, it will be very bad," Hussein said. "I think they will keep making the people stay here, and they'll die of diseases."

Hussein worked for a Rakhine boat owner and would often eat dinner at his house. Now he lives in a 10 foot by 10 foot room, which he shares with nine other family members.

He said he plans to use his knowledge of the boat routes to flee as soon as the rains stop.

"I will go out to sea and go wherever Allah takes me," Hussein said.

Danny Gold's reporting was made possible by a grant from the International Center For Journalists. NBC News' Alexander Smith and Reuters contributed to this report.
Posted by Rohingya Arakanese Refugee Committee (RARC) at 11:06 PM