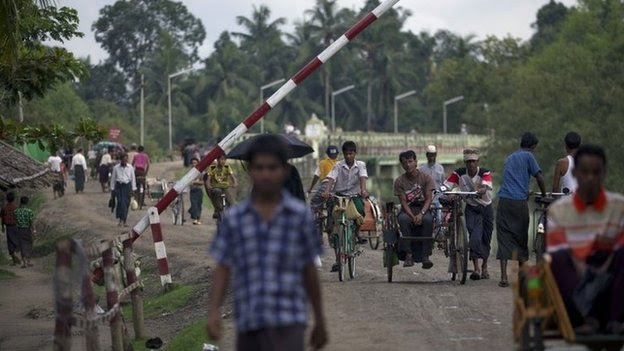 The attacks were said to have taken place near the town of Maungdaw
The UN human rights chief has called on Burma to investigate reports that dozens of Rohingya Muslims have been killed in attacks by Buddhists in Rakhine state.

In a statement, Navi Pillay said a "full, prompt and impartial investigation" was needed.
The UN had "credible information" that 48 Rohingya Muslims had been killed in violence in early January.

The government, however, has rejected the claims as groundless.

In a statement sent to the BBC, presidential spokesman Ye Htut said the UN was not listening to its own staff on ground and was damaging its reputation in Rakhine state.
Rakhine state - in the west of Burma, which is also known as Myanmar - has seen several outbreaks of violence targeting the Rohingya Muslims since June 2012.
'Receive justice'

In the statement, the UN said eight Rohingya Muslim men were attacked at Du Char Yar Tan village on 9 January.
On 13 January, a police official was killed in the same village by Rohingya Muslims.

This triggered the killings of at least 40 Rohingya men, women and children by local security forces and Rakhine people, the UN statement added.
The government statement only acknowledged the death of the police sergeant.
"I deplore the loss of life ... and call on the authorities to carry out a full, prompt and impartial investigation and ensure that victims and their families receive justice,'' Ms Pillay said.
"By responding to these incidents quickly and decisively, the government has an opportunity to show transparency and accountability, which will strengthen democracy and the rule of law in Myanmar.''
The Rohingya people are considered stateless and are rejected by both Burma and neighbouring Bangladesh.
At least 200 people were killed in fierce clashes between Buddhist and Muslim communities in Rakhine state in 2012.
Tens of thousands of Rohingya Muslims remain displaced in the wake of that violence, many still living in camps.
Sporadic outbreaks of anti-Muslim violence continued throughout 2013 in other parts of Burma as well.