Gemunu Amarasinghe/AP
A woman comforted her child while waiting in a village pharmacy. 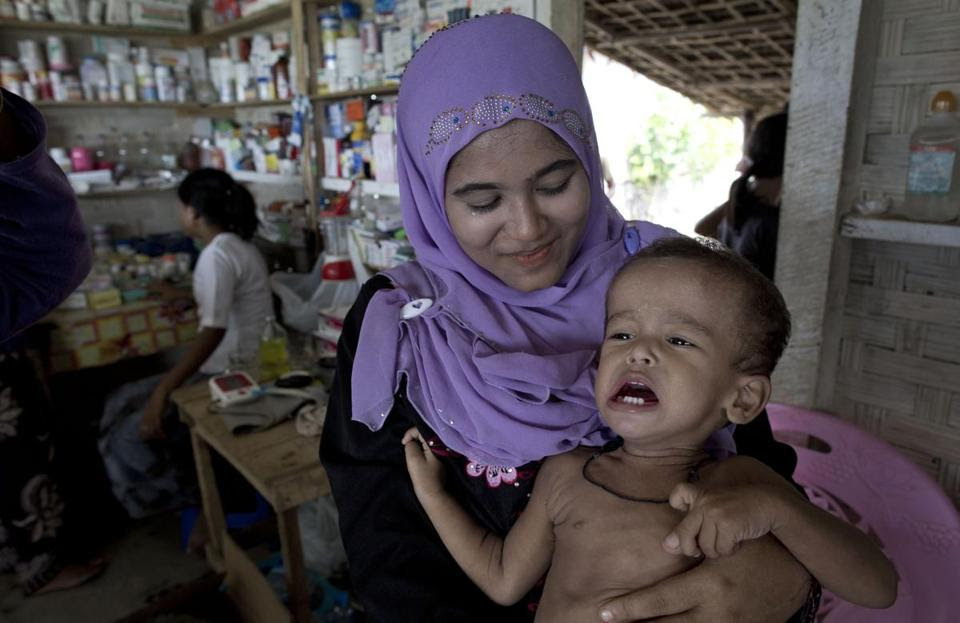 OHN TAW GYI CAMP, Myanmar — Born just over a year ago, Dosmeda Bibi has spent her entire short life confined to a camp for one of the world’s most persecuted religious minorities. And like a growing number of other Muslim Rohingya children who are going hungry, she’s showing the first signs of severe malnutrition.

Her stomach is bloated and her skin clings tightly to the bones of her tiny arms and legs. While others her age are sitting or standing, the baby girl cannot flip from her back to her stomach without a gentle nudge from her mom.

‘‘I’m scared she won’t live much longer,’’ whispers Hameda Begum as she gazes into her daughter’s dark, sunken eyes. ‘‘We barely have any food. On some days I can only scrape together a few bites of rice for her to eat.’’

Myanmar’s child malnutrition rate was already among the region’s highest, but it’s an increasingly familiar sight in the country’s westernmost state of Rakhine, which is home to almost all of the country’s 1.3 million Rohingya Muslims.

More than 140,000 have been trapped in crowded, dirty camps since extremist Buddhist mobs began chasing them from their homes two years ago, killing up to 280 people. The others are stuck in villages isolated by systematic discrimination, with restrictions on their movement and limited access to food, clean water, education, and health care.

Even before the violence, the European Community Humanitarian Office reported parts of the country’s second-poorest state had acute malnutrition rates hitting 23 percent — far beyond the 15 percent emergency level set by the World Health Organization.

With seasonal rains now beating down on the plastic tents and bamboo shacks inside Rohingya camps, the situation has become even more miserable and dangerous for kids like Dosmeda.

Naked boys and girls run barefoot on the muddy, narrow pathways, or play in pools of raw sewage, exposing them to potential waterborne diseases that kill. Some have black hair tinged with patches of red or blond, a tell-tale sign of nutrient deficiency commonly seen in places experiencing famine.

After a 10-day visit to the area last month, Yanghee Lee, the UN Special Rapporteur on human rights in Myanmar, summed up what she saw.
‘‘The situation is deplorable,’’ she said.

Myanmar, a predominantly Buddhist nation, only recently emerged from a half-century of repressive military rule and self-imposed isolation. Despite occasional expressions of concern, the United States, Britain, and others in the international community have largely stood by as conditions for the Rohingya deteriorated.

Some ambassadors and donor countries say privately that coming down too hard on the new, nominally civilian government will undermine efforts to implement sweeping reforms and note there has already been a dramatic backslide. Others don’t want to jeopardize much-needed multibillion dollar development projects in the country.

But their hesitancy to act has emboldened Buddhist extremists, now dictating the terms of aid distribution in Rakhine.

The government claims ethnic Rohingya are illegal migrants from neighboring Bangladesh and denies them citizenship, even though many of their families arrived generations ago.
Source: Here
Posted by Rohingya Arakanese Refugee Committee (RARC) at 1:18 AM