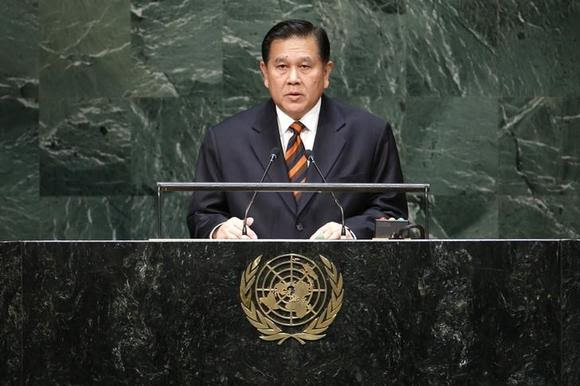 (Reuters) - Thailand identified fewer victims of human trafficking last year than in 2013 and convicted fewer perpetrators of the crime, according to a government report aimed at lifting the country from a U.S. list of the world's worst offenders.

The U.S. State Department last year downgraded Thailand to the lowest category in its influential annual ranking of countries by their counter-trafficking efforts.


Thailand's military-backed government was "confident" it had met the minimum standards to improve its ranking, said Songsak Saicheua, a director-general at the foreign ministry, at a Friday news conference announcing the report's release next week.

However, this compares unfavorably to Thailand's record in 2013, which sealed its demotion to the State Department's lowest "Tier 3" category, a designation it shares with North Korea, Libya and 20 other countries.

In a Jan. 26 meeting in Bangkok with Daniel Russel, assistant U.S. secretary of state for East Asia and the Pacific, the Foreign Minister General Tanasak Patimapragorn reiterated his government's "unwavering commitment to sustainably solving the human trafficking issue".

But rights groups and some officials say words have not translated into action, with the junta preoccupied with reviving a sluggish economy, drafting a constitution and stifling even the mildest expression of dissent.

The government was placing "special emphasis" on punishing officials complicit in trafficking, said the report, citing legal action against at least a dozen people, mostly police.
None of the officials had yet been convicted, said Songsak.

Last year, Thailand gave legal papers to 1.6 million undocumented migrant workers, which the government said made them less vulnerable to exploitation and trafficking.

"It is a positive step that the government recognizes and acts upon this link between migration management and anti-trafficking," said Max Tunon, a senior program officer at the International Labour Organization.

Thousands of Rohingya Muslims and Bangladeshi boat people are held at remote Thai jungle camps where traffickers extract a ransom to smuggle them across the border to Malaysia. Many die en route, or are beaten or killed by traffickers.

The Rohingya are a mostly stateless minority fleeing violence and poverty in Myanmar. A Thai government report submitted to the State Department last year did not define the Rohingya as trafficking victims, despite their well-documented abuse.

The government also said the authorities were using anti-money laundering laws to put pressure on human trafficking syndicates and had set up a hotline which helped identify 123 trafficking-related cases in 2014.

"For years, hotlines have been around and migrants have been registered, but the trafficking problem continues unabated," he said.